Administration Narayanganj Sub-division was formed in 1882 and it was turned into' distict in 1984. Of the five upazilas of the district araihazar is the largest (183.35sq km) and bandar is the smallest (55.84 sq km). narayanganj city corporation was established on 5 May 2011. 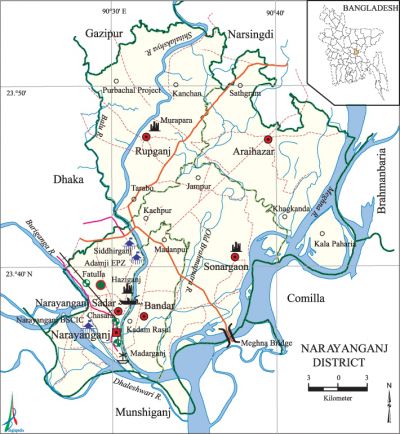 History of the War of Liberation In 1971 Narayanganj district was under Sector 2. On 28 March the Pak army launched a surprise attack on Uttar Chasara of Narayanganj sadar and killed a number of people. On 3 April the Pak army brutally killed 54 persons at the playground of Sirajuddowla Club under Bandar upazila. During the war of liberation the freedom fighters raided the Razakar camp at Baburail Bridge and killed 7 razakars. On 29 November the Pak army shot 139 persons dead at a place on the bank of the Buriganga in Dikri Char area under Narayanganj Sadar upazila. Besides, the Pak army conducted mass killing at village Sanmandi, Pirojpur and Chilarbagh of Sonargaon upazila.