Bangabandhu Jamuna Multipurpose Bridge opened in June 1998, is the longest bridge in Bangladesh, the 5th longest bridge in South Asia, and the 92nd longest bridge in the world. It was constructed over the river jamuna, mightiest of the three major rivers of Bangladesh, and fifth largest in the world in terms of volumetric discharge. It has been named after the founder president of Bangladesh bangabandhu sheikh mujibur rahman. The bridge established a strategic link between the eastern and western parts of Bangladesh. It generates multifarious benefits for the people and especially, promotes inter-regional trade in the country. Apart from quick movement of goods and passenger traffic by road and rail, it facilitated transmission of electricity and natural gas, and integration of telecommunication links. 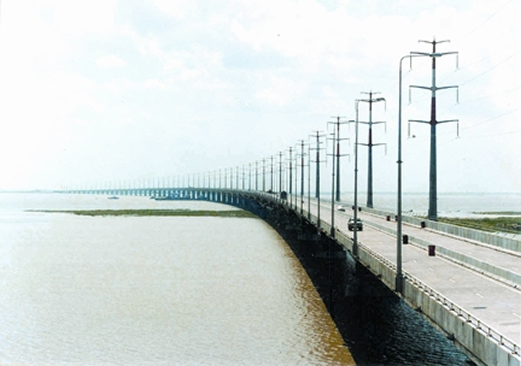 The bridge, stretching from Tangail to Sirajganj is located on the Asian Highway and the Trans-Asian Railway which, when fully developed, will provide uninterrupted international road and railway links from South-east Asia to North-west Europe.

Considering the fact that the width of the main channel does not exceed 3.5 km, and after making allowances for floods, a bridge length of 5 km was considered adequate. In October 1995, one year after the commencement of physical work of the bridge, a bridge length of 4.8 km, instead of a flood-width of the river at 14 km, was finalised. This narrowing was essential to keep the overall project cost within economic viability. It has, however, required considerable river training work to keep the river under the bridge within desired width.

The people and the successive governments in this part of the subcontinent always longed to bridging the mighty Jamuna and thereby integrate the communication systems of the region. Popular leader abdul hamid khan bhasani first raised the demand for construction of the Jamuna Bridge at a political level in 1949. In the 1954 provincial elections of East Pakistan, the 21-point manifesto of the united front contained a demand for the bridge. On 6 January 1964, Mohammad Saifur Rahman, a member from rangpur in the Provincial Assembly inquired about government's intentions with regard to the construction of a bridge over the Jamuna. On 11 July 1966, Shamsul Haque, another member from Rangpur in the same Assembly, moved a resolution for the construction of the bridge and the house adopted it unanimously.

Accordingly, Freeman Fox and Partners of UK carried out a preliminary feasibility study in 1969. They recommended a rail-cum-road bridge near Sirajganj with an estimated cost of $175 million. The estimates were preliminary in nature and a more detailed study was recommended. On the other hand, in his address to the nation over radio and television on the eve of general election in Pakistan in 1970, the awami league leader Sheikh Mujibur Rahman mentioned the construction of Jamuna Bridge as an election pledge of his party. But all efforts were interrupted due to political unrest and liberation war.

After the independence of Bangladesh, the new government publicly stated its intention in 1972 to construct a bridge over the Jamuna and budgetary provisions were kept for the purpose in the 1972-73 budget. On being invited by the Bangladesh government, the Japanese International Cooperation Agency (JICA) undertook a feasibility study in 1973 on the construction of a road-cum-rail bridge over the Jamuna.

The JICA study, completed in 1976, concluded that the Jamuna project would cost $683 million with an economic rate of return (ERR) of only 2.6%. Considering that the project was not technically and economically viable, the government had abandoned the project. The government however, revived it later in 1982 and commissioned a new study to determine the feasibility of transferring natural gas to western parts of the country across the Jamuna. The study concluded that an independent gas connector was not economically viable. However, the consultants made an assessment of the engineering feasibility and cost of a combined road-cum-gas transmission bridge, which introduced the concept of a multipurpose bridge. It was estimated that a 12-km long bridge with three road lanes would cost $420 million. Upon consideration of the report, the cabinet made a decision to take immediate steps in pursuit of the project.

The Jamuna Multipurpose Bridge Authority (JMBA) was set up by an ordinance promulgated by the President on 3 July 1985 to implement the project. For mobilisation of domestic resources, another ordinance was promulgated by which a Jamuna Bridge surcharge and levy were introduced. A total of Tk. 5.08 billion was mobilised in the process till its abolition.

In 1986, phase-I feasibility study for the bridge was carried out when the site between Sirajganj and Bhuapur (Tangail) was found to be the best. Between 1987 and 1989, the phase-II feasibility study was carried out when a road-cum-rail-cum-power bridge was found both economically and technically viable. Funding arrangements for the bridge were finally made with IDA, ADB and OECF of Japan by the government of Bangladesh in 1992. Tenders were invited through international bidding for construction contracts in 1993. Contracts for the bridge, river training works and two approach roads were awarded in March 1994. The foundation stone of the bridge was laid on 10 April 1994. Physical implementation of the project commenced on 15 October 1994, and all the components except gas transmission line were completed by June 1998. The bridge was opened for traffic on 23 June 1998.

Bangabandhu Bridge has been now placed under the administrative control of Bangladesh Bridge Authority. It currently wields enormous socio-economic impact on Bangladesh by linking millions from the country's northwestern districts to the rest of the country. A journey that previously took 12 hours to travel from Dhaka to Bogra by using road transport and river ferries, now takes only 6 hours since the opening of Bangabandhu Bridge. The bridge also carries railway traffic and ties together Bangladesh's power and gas networks in a national grid. [Helal Uddin Ahmed]