Bangla Academy founded on 3 December 1955 at Burdwan House, Dhaka, was the outcome of the language movement of 1952, and as such, a symbol of the movement and of Bengali nationalism. Since its inception, it has been playing a significant role in the development and modernisation of Bangla. 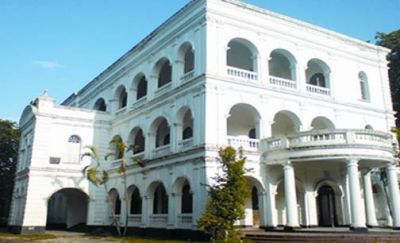 Though 1952 is a milepost in the language movement, the struggle to give Bangla due recognition may be traced back to the second decade of the 20th century. At a meeting of the vangiya sahitya parishad in 1925 chaired by haraprasad shastri, Dr muhammad shahidullah proposed the use of Bangla for academic and literary purposes. At the All-India Muslim Education Conference held in 1940, chaired by ak fazlul huq, he called upon the Government of Bengal to set up a translation department. On 31 December 1948, in his presidential address at the East Pakistan Literary Conference held in Dhaka, he proposed the establishment of a language academy.

After the events of 21 February 1952 the demand for establishing a centre like Bangla Academy became stronger. On 29 April 1952 the azad, a leading Bangla newspaper, in its editorial stressed the importance of setting up an academy for Bangla. The university of dhaka took some initiatives to set up an academy, but the attempt fell through.

In the provincial elections of 1954 the united front, led by Maulana abdul hamid khan bhasani, AK Fazlul Huq and huseyn shaheed suhrawardy, defeated the muslim league. In its twenty-one point election manifesto, the United Front had proposed turning Burdwan House, the official residence of the chief minister-who had ordered the firing on 21 February 1952-into a student hostel for the time being and into a centre for research on Bangla language later. Fazlul Huq, the chief minister of the newly formed United Front Government, took some steps to set up an academy, but the dissolution of the United Front Government and the imposition of Governor's Rule in East Pakistan in May frustrated the attempt.

In June Governor's Rule was withdrawn and the United Front again came to power. This time they kept their election promise and on 3 December 1955 abu hossain sarkar, the new chief minister, inaugurated Bangla Academy at Burdwan House, thus recognizing the significance of Bangla as the mother tongue of the people of East Pakistan.

The Academy was initially a government institution and was run by a committee. mohammad barkatullah was appointed secretary and special officer of the Academy. On 1 December 1956, Dr muhammad enamul haq took over charge as the first Director of the Academy. In 1957 the Bangla Academy Act was passed, giving the academy the status of an autonomous organisation, financed by the government.

The functions and structure of the Academy have been devised on the model of the French Academy. The main function of the Academy is the promotion and development of Bangla. It is also involved in research and publication on Bangla language and literature. It has five divisions: Research, Translation, Compilation, Publication and Library. It has a considerable folklore collection, including puthis (manuscripts) of ancient and medieval periods, folk songs, folk tales, rhymes, puzzles etc., some of which has been published. It has published textbooks and reference books in Bangla, collected works of major Bangla writers, textbooks and reference books in Bangla, Bangla translations of books on literature, history, sciences, social sciences, etc, as well as translations of major works in Bangla into foreign languages.

During the Pakistan period, Bangla Academy was a semi-government organisation. In the financial year 1960-61 it received an annual grant of Rs two lakh from the provincial government and a regular annual grant of Rs one lakh from the central government. In 1969-70 the grant was increased, but it was not sufficient to meet the requirements of the Academy. After the liberation of Bangladesh, the Central Board for Development of Bengali, run by the earlier Central Government of Pakistan, was merged with the Bangla Academy and the administrative structure of the Academy was changed. The post of Director was upgraded to that of Director General. Two separate new divisions' were opened: Textbook and Folklore. The allocation of the government increased to 32 lakh in 1972-73. After 25 years of independence the fourth five-year plan (1991-95) allocated Taka six crore for publication. The Bangla Academy is the biggest publishing house of the country, and, up to July 2000, had published 4034 books and journals. The printing press of the Academy is quite modern and equipped with computers. The Academy has more than two hundred officers and employees to conduct its business.