Bangladesh Academy for Rural Development (BARD) an autonomous national institution for training, research and experiment on rural development. Established in 1959 in Comilla, the institution is governed by a Board of Governors with the Minister for Local Government, Rural Development and Cooperatives as its chairman. The director general is the chief executive of the institution. One of the mandatory functions of BARD is to provide training for both officials and non-officials. During 1959-1988, a total of about 1,18,000 participants attended various training courses, visit programmes, workshops and seminars conducted by the Academy. Located at Kotbari, 10 km off Comilla town, BARD has a very entertaining campus of 156 acres of land in natural surroundings.

It has a 63-multi disciplinary faculty under nine divisions. There are five hostels, four conference rooms, and a beautiful mosque, a library with a rich collection of books, a health clinic, sports complex, two cafeterias and a primary school on the academy campus. 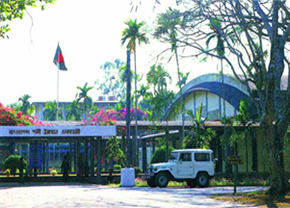 The Academy's research is aimed at collection of socio-economic data for the purpose of planning and project preparation. Research findings are used as training materials in the Academy and as information materials by ministries, the Planning Commission, and policy makers for drawing up development programmes. The Academy is also engaged in evaluating major national rural development programmes either independently or jointly with government agencies, universities and research organisations.

BARD has undertaken experimental projects to evolve models for improved institutions, administrative structures, coordination and methods of production. Project activities have involved villagers, village institutions, local councils, and government officials. Since its inception, the Academy has conducted about 48 experimental projects on various aspects of rural development. In the early 1960s the Academy evolved a new system of rural cooperatives. The small farmers of Comilla sadar thana were organised into primary cooperatives. Great emphasis was given on member training, regular weekly meetings and thrift deposit, as well as adoption of new technologies like high yielding variety of seed, fertiliser, irrigation, etc. Village based primary cooperatives were federated at the thana level and the federation was called Thana Central Cooperative Association. The federation was designed to provide training and credit support to the village level primary cooperatives, and to undertake ventures such as storage, processing, marketing, mechanisation, etc. This two-tier cooperative was found viable and was adopted by the government in 1972 and has been replicated all over the country under the Bangladesh Rural Development Board.

The Thana Training and Development Centre (TTDC) was designed as a model of decentralised and coordinated rural administration for the sake of development. TTDC aims at effective coordination between nation-building departments and organisations of the rural people (local councils, cooperatives, etc). The people and the government are partners of development, and TTDC provides the institutional mechanism to promote this partnership. Replication of TTDC in phases throughout the country was accepted as a programme by the government in 1963, and was gradually replicated in all the thanas. TTDC was used as a base for introducing a decentralised administration system under the thana parishad in 1982. The Academy involved villagers and local councils in the development of physical infrastructures through an experimental project, which later came to be called Rural Works Programme (RWP). In addition to providing flood protection and facilitating communication, the projects generated employment for landless in the lean periods. The success of the programme led to its nationwide replication in 1962-63.

Development of market centres, bridges, culverts, sluice gates, and the construction of TTDC and union parishad buildings have marked the expansion of the scope of RWP in recent years. In Bangladesh, the period from December to March normally remains dry. In the absence of irrigation arrangement no agricultural operation could be taken up during this period in the past even though water remained available in canals, rivers and underground. The simple operation of lifting surface and underground water and channelling it through canals remained unrealised due to lack of technology and appropriate organisation. The Academy's experiment in its laboratory area (Comilla sadar thana) to use surface water through lift pumps and underground water through tubewells with the management of village cooperatives led to a new rice cultivation season (Boro) during this period. As implementation of the experimental programme as well as operation of the irrigation technology required collaborative efforts of cooperators and thana level officers, a new institutional arrangement emerged which became known nationwide as the Thana Irrigation Programme in 1969.

The family planning programme of the government launched in 1965 was more or less based on the results of experiments at Comilla. The institutional infrastructure of cooperative, the administrative infrastructure of TTDC, and the physical infrastructure of the Rural Works Programme and the Thana Irrigation Programme constituted a single united approach to rural development. This approach was an integrated framework, which in its totality can be called the comilla model of rural development. The model was initiated, cradled and brought to replicable maturity by akhter hameed khan, the founder-director of bird, and his colleagues. [MS Islam and G Mostakim]