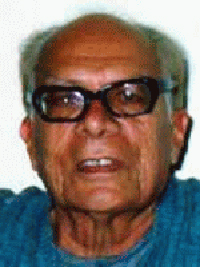 Khan, Akhter Hameed (1914-1999) social scientist, development activist and founder of the bangladesh academy for rural development (BARD), Comilla was born in Agra, India. He obtained MA from Agra University in 1934 and joined the Indian Civil Service (ICS). As an ICS probationer, he studied literature and history at Cambridge University. During most of his career as an ICS officer he served in East Bengal.

The indifferent attitude of the colonial rulers towards Bengal famine of 1943 (which caused the death of about 3 million people) shocked him so much that he resigned from the Indian Civil Service. Akhter Hameed Khan then began to work in a village near Aligarh as a labourer and locksmith. This Tolstoyan experiment lasted for two years. In 1947, he took up a teaching position at the Jamia Millia, Delhi, and served there for three years.

After the partition of Bengal in 1947, Akhter Hameed Khan migrated to Karachi and from there he came to East Pakistan and became the principal of the comilla victoria college.

He worked there till 1958 and during this period, his interest in rural development through participation of the grassroot level people was developed. In 1958, he went to the Michigan State University (USA) for a special orientation in rural development. He returned in 1959 and set up BARD at Comilla, where he worked until 1971 as the director. The BARD concept, popularly known as Comilla model for rural development and cooperatives, considerably enhanced the image of Bangladesh in the world. Akhter Hameed Khan became famous for successful working of the model.

After independence of Bangladesh, Khan moved to Pakistan and served as a Research Fellow, first at the Agricultural University, Lyallpur, and then in 1972-1973 at Karachi University. In 1973, he went back to the Michigan State University as a visiting professor. He remained there until 1979, when he began serving in the Rural Development Academy at Bogra in northern Bangladesh as an adviser. Akhter Hameed Khan worked as a visiting professor in the Lund University, Sweden, at the Woodrow Wilson School, Princeton University, at Harvard University, and Oxford University. In 1980, he founded the Orangi Pilot Project (OPP) in Karachi. The project aimed at socio-economic development of a vast area of Pakistan, considered as the Asia's biggest command area of a singe development project. Khan was the project director and proved to be its dynamic and innovative leader.

Well versed in English, Bengali, Arabic, Persian, Urdu, and Hindi, Khan wrote a large number of articles, reports and monographs, mostly relating to rural development in general and the BARD programme in particular. BARD compiled and published his writings in three volumes under the title The Works of Akhter Hameed Khan (1982). For his pioneering work in rural development Khan was honoured with the Sitara-e-Pakistan title (1961) and the Magsaysay award (1963). The University of Michigan also awarded him a honourary Doctorate of Law in 1964. [Sajahan Miah]