Bee insects of the superfamily Apoidea, order Hymenoptera; about 20,000 species of bees under 19 families are living today in almost every part of the world except the polar regions. Ninety-five percent of these lead a solitary life; the rest are social bees that live and work together in large groups or colonies. A strong, healthy bee colony may contain between 50,000 and 60,000 bees but there may be up to 80,000 in one hive. Honeybees and bumblebees are examples of social bees. There are three different kinds of bees in the hive: a queen, several hundred drones, and thousands of worker bees; each form is structurally and physiologically different from the others.

The essential works in the society are nest building, feeding and tending the brood, and defense of the nest; these are performed by the female workers. However, the fertile female, the queen, performs only one task, ie egg-laying. The workers can be differentiated as soldiers, outside workers, inside workers, and nest builders. The male plays no part in daily nest activities. After discovering a new source of food, a bee returns fully loaded to the hive, delivers nectar and pollen and notifies the other bees about the new food source. A female of the solitary bees makes her own nest and usually burrows in the ground. Solitary bees have no castes. Several families of bees have parasitic species that lay eggs in the cells of various working bees.

The honeybee has been valued since pre-Christian times for its honey and beeswax. Bee-keeping in modern times has become a lucrative and highly developed enterprise. Royal jelly, produced by honeybee workers, has enjoyed some popularity as a cosmetic, although its beneficial properties in this respect have not been satisfactorily demonstrated.

Eighteen species of bees were reported from Bangladesh, of which four are honeybees. The smallest Bangladeshi species is Trigona fuscobaltiata which is only 3.4 mm long. These small bees are found to construct nests in tree holes, crevices of rocks, wall holes and also in branches and leaves of small trees.

Bees have a special stomach called honey stomach in which they carry nectar. All female bees have a stinger used for self-defense. They are useful pollinators of commercial crops and are known to pollinate about 80% of the crops. [Badrul Amin Bhuiya]

Bumblebee Large, hairy social bees of the family Apidae, order Hymenoptera. Bumblebees are colorful and one of the largest bees in the world, readily recognizable by their brilliant huge sight and humming sound. Like honeybees they also have caste differentiation ie workers, males, queens, and a kind of task allocation (size linked task allocation). In spring a successfully over-wintered queen starts nesting by laying eggs usually in a nest of deceased small mammals, or other animals. New queens and males emerge at the end of colony development. The new queen mates with the male and hibernates until next spring; however, the male dies after mating. Bumblebees play an important role in crop pollination. The European bumblebee (Earth Bumblebee) Bombus terrestries is the most prominent one that is being reared in the laboratory and managed for tomato pollination. Other important bumblebees are B. ignitus, B. hypocrita, B. impatiens, B. occidentalis, B. bimaculatus, B. affinis, B. terricola, B. hortorum, etc. Bangladesh has two species B. eximius, reported from sylhet and B. montivagus, reported from chittagong hill tracts. [Md Hannan]

Honeybee Bees that produce sweet, viscid fluid from the nectar of flowers, taken by the worker bees and carried in the honey stomach back to the hive. Bangladesh has 4 species: Apis cerana indica, A. dorsata, A. florea, and A. mellifera. A. c. indica is commercially important in Bangladesh and is raised in wooden boxes ie artificial beehives. 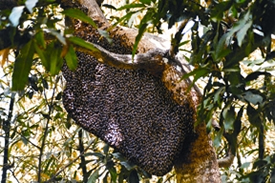 A. dorsata is the wild type, makes its hive in forests, on large trees around houses, and even attached to the cornice. The professional honey collectors hunt A. dorsata colonies as a source of honey and often do immense damage to the bees and hives. Such an age-old practice is one of the major causes of the decline of honeybee population in the country. Among insects honeybees are considered one of the most economically important species. Besides honey, they also produce bees wax, propolis, and help to pollinate various crops. [Md Hannan]

Solitary Bee Bees that do not live in a community. In solitary species each female makes her own nest or nests, provisions, and lays eggs in the cells and has little interaction with other females either of her own or the daughter's generation. The solitary bees accumulate enough food for the growth of their larva. After oviposition the mother seals the cell and moves on to construct another. Usually she dies before the progeny emerges; therefore, there is no contact between generations although there remain some exceptional patterns in some of them. Most of the species of solitary bees have only a single generation but some have two generations per year. The bees make their nests in the ground or in the tree hollows, softwood, bamboo, reeds, twigs, etc. Some of them make their nests by using soil, or by using plant leaves, petals, cotton, resin, or even by manipulating the pith of tabular plants. In Bangladesh they also make nests in the mud wall of houses, thatched roofs and in cut off dry border plantings. Of the 30,000 species of bees identified so far most are solitary bees; these are widespread from the tropics to the temperate zones. The following genera have been recorded from Bangladesh: Xylocopa, Megachile, Nomada, Nomia, Andrena, Pithitis, Sphecodes, Lasioglossum, Ceratina, and Halictus. [Md Hannan]

Stingless Bee Bees without functional stings of the family Apidae, order Hymenoptera. The stingless bees are small in size, 2-5 mm in length and there are about 500 species distributed all over the world. In Bangladesh one species, Trigona fuscobaltiata has been reported from the southern-eastern hilly regions; small in size, bees of this species make nests in tree holes, bamboo stems used as pillars of houses, spaces of wooden walls, cracks or crevices of rocks, holes, etc. Like honeybees they have a caste system and division of labour. Like honeybees they also store honey and pollen in their nests, and usually occur in colonies. [Md Hannan]

Bee-keeping Raising of honey-bees for commercial production of honey. Bee-keeping includes maintenance, management and domesticating bees in artificial boxes. Honey collection in the past was done mainly from the jungle. This practice involved bee hunting which is found even at the present time. Efforts to keep bees in wooden hives started in this subcontinent probably at the time of the Gandhian self-reliance movement in the forties. Prior to this, people raised bees in logs, clay-pots, or in other similar devices.

During the Pakistan period, government efforts to introduce scientific bee-keeping failed, perhaps due to lack of interest and absence of a well-thought plan for the execution of the programme. In the 1970s bee-keeping again got the attention of some people and organisations. The Bangladesh Small and Cottage Industries Corporation (BSCIC) and proshika, a non-government organisation played important role in restoring bee-keeping. In 1977, an apiculture programme was financed by the Canadian Universities Service Organisation (CUSO), an organ of the Canadian International Development Agency (CIDA) and it was observed that through training and extension a comprehensive programme of scientific bee-keeping could be developed in Bangladesh. To give administrative and institutional support in favour of this observation, the bangladesh institute of apiculture (BIA) was established in 1981.

At present, scientific bee-keeping is well established in Bangladesh. Technical know-how, equipment, floral availability, and the eagerness of the common people, all appear to be favourable for bee-keeping in Bangladesh. Some NGOs have extended and promoted bee-keeping activities in 24 upazilas of 7 districts through 5 Research and Demonstration Centres (RDC) set up in different areas of the country.

BIA achieved significant success in the introduction of bee-keeping through training, extension, applied research and marketing. BSCIC and BIA often supply bee-keepers artificial wooden hives at a nominal price. Bee-keeping can be considered and might be taken up as an income-generating source especially for rural poor people who are in need of extra funds for survival. In rural areas there are abundant bee forage plants and vegetable gardens, and also huge areas of mustard cultivation. [Md Nurul Islam]