Chittagong Hill Tracts (CHT) the only extensive hill area in Bangladesh lies in southeastern part of the country (21°25'N to 23°45'N latitude and 91°54'E to 92°50'E longitude) bordering Myanmar on the southeast, the Indian state of tripura on the north, Mizoram on the east and chittagong district on the west. The area of the Chittagong Hill Tracts is about 13,184 sq km, which is approximately one-tenth of the total area of Bangladesh.

With the establishment of Pakistan in 1947, the Chittagong Hill Tracts came under the jurisdiction of Pakistan. After the independence of Bangladesh in 1971, it came under the jurisdiction of Bangladesh and entered into a period of remarkable changes and development. During the early eighties as part of the countrywide administrative reforms the Chittagong Hill Tracts was divided into three individual districts. These are rangamati, khagrachhari and bandarban districts.

On 2 December 1997 the Government of Bangladesh signed the peace accord with the Parvatya Chattagram Jana Samhati Samiti (a political platform of the CHT hill peoples) to stop two decades of armed insurgency.

Soil conditions The hill soils (dystric cambisols) are mainly yellowish brown to reddish brown loams which grade into broken shale or sandstone as well as mottled sand at a variable depth. The soils are very strongly acidic.

Vegetation The hills are unsuitable for cultivation but natural vegetation remains widely. jhum cultivation is being practised on the hill slopes. Cotton, rice, tea and oilseeds are raised in the valleys between the hills.

Population Dominated by Mongolian group. The major Mongolian tribes are chakma, Tipra, murong and magh. In fact the Chittagong Hill Tracts host thirteen different tribes who are divided into nearly a hundred different sects. Total population enumerated in the 1991 census was 1.042 million of which 562,597 were male and 479,776 female. buddhism is being followed by Chakma and Marma, the hinduism by the Tripura and christianity by Mizo and Bawm. Some other tribes maintain harmony amongst the spirit, animal and plant.

The pattern of human settlement throughout the CHT showed much territorial intermingling. Some groups dominated in certain parts of the CHT (eg the Chakma in the centre, and Marma in the tract between the Karnafuli and Sangu rivers) and others were concentrated in specific areas (eg Tripura in the north, Mru in the south). There was also a distinction between groups living in hill valleys and groups living on the ridges of the hills. Nevertheless, in many places local settlement patterns were highly complex. For example, seven different groups could be found living in close proximity in an area of about 15 by 10 km around the township of Ruma on the Sangu river in the southern CHT.

Economy Semutang gas field located in Khagrachhari district is the only gas field in Chittagong Hill Tracts. It was discovered in 1969 by the national oil company (Oil and Gas Development Corporation of the then Pakistan). However, gas seeps are reported from Sitapahar (Kaptai) and Jaldi wells, while oil seep from Uttan Chatra. Other resources include sandstones, boulders (calcareous concretions), conglomerates and lignitic coals. A paper mill is built on the bank of the karnafuli at Chandraghona and a hydro power station (karnafuli hydro power station) at Kaptai with the aim of generating electricity and providing irrigation and flood control facilities. Hill people produce woven cotton goods and bamboo nets and baskets.

'Flora The hills, rivers and cliffs are covered with dense bamboo breaks, tall trees and creeper jungles. The valleys are covered with thick forest. The vegetation is characterised by semi-evergreen (deciduous) to tropical evergreen dominated by tall trees belonging to dipterocarpaceae, euphorbiaceae, lauraceae, leguminacae and rubiaceae.

Fauna The fauna mainly includes monkey, fox, jungle cat, fishing cat, wild boar, land turtle, king cobra, reticulated python, rat snake and other non-poisonous snakes together with large number of species of lisards and amphibians like frog and toad, and tree frogs. The bird life of the Chittagong Hill Tracts is wonderfully rich. More than 60 families of birds are found.

Forest Most of the hills are covered with forests containing valuable timber trees, bamboos, canes and a kind of grass known as shan. 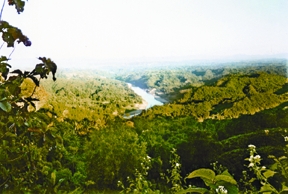 Physiography According to the physiography of Bangladesh the CHT falls under the Northern and Eastern Hill unit and the High Hill or Mountain Ranges sub-unit. This sub-unit covers most of CHT, some small parts of southern Habiganj and the south and eastern borders of Maulvi Bazar. At present, all the mountain ranges of the Chittagong Hill Tracts are almost hogback ridges. They rise steeply, thus looking far more impressive than their height would imply. Most of the ranges have scarps in the west, with cliffs and waterfalls.

The region is characterised by a huge network of trellis and dendritic drainage consisting of some major rivers draining into the bay of bengal. The major rivers are karnafuli, sangu, matamuhuri and feni. Within the hill tracts, the Karnafuli has several important tributaries, of which Chengi, kasalong and Rainkhiang are the main ones.

Generally the hill ranges and the river valleys are longitudinally aligned. Four ranges, with an average elevation of over three hundred metres, strike in a north-south direction in the northern part of the hill tract districts. These are Phoromain range (Phoromain, 463m), Dolajeri range (Langtrai, 429m), Bhuachhari (Changpai, 611m) and Barkal range (Thangnang, 735m). South of the Karnafuli river within the Chittagong Hill Tracts, there are seven main mountain ranges within Bangladesh. These are: Muranja range (Basitaung, 664m), Wayla range (most of this range is in Myanmar), Chimbook range (Tindu, 898m), Batimain range (Batitaung, 526m), Politai range (Keokradang, 884m; Ramiu Taung 921m, Saichal-Mowdok range (Bilaisari, 669m) and Saichal range. Saichal range contains the highest peaks of Bangladesh. These are Waibung (808m), Rang Tlang (958m), Mowdok Tlang (905m), and Mowdok Mual (1,003m) which is on the border with Myanmar.

Some of these hill ranges also contain important geological structures to form excellent structural traps for natural gas accumulation. The structures are: Semutang anticline (average elevation is 80m except in some areas where it reaches over 160m), Sitapahar anticline (245 to 330m in the south to middle of the structure and 330 to 410m in the northern part), Matamuhuri anticline (average elevation ranges from 245 to 330m in the northern part, but in the southern part it increases from 410 to 570m and the maximum elevation is 710m in the south) and Bandarban anticline (maximum elevation varies between 650 and 800m, with three peaks of around 935m, 960m and 965m located from north to south).

Lakes There are two natural lakes (Rainkhiangkine lake and bagakine lake) and one artificial lake (kaptai lake). The Kaptai lake covers an area of about 767 sq km in dry season and about 1,036 sq km in the monsoon. 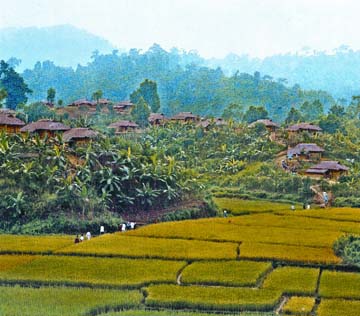 A habitat in Chittagong Hill Tracts

Geology The Chittagong Hill Tracts is originated as a result of the collision between India and Asia. After the break up of Gondwanaland, Indo-Australian plate combinedly moved southeasterly of about 1750 km at a drift rate of 6 cm/yr. Later India broke apart from Australia and started to drift north northeasterly. That is the time when the history began for the Chittagong Hill Tracts. Gradually, India moved in a more northerly direction at about 2,500 km at a rate of 5 cm/year before it first collided with Eurasian plate during Eocene. Since then, Indian plate moved 1,000 km more in a north-westerly direction at a rate of 3 cm/year until the complete closure of tethys. Plate motion resumed or accelerated in a slightly different direction in early Oligocene time with India converging towards Asia in a more northeasterly direction. The oceanic crust started subducting beneath the Burmese sub-plate thus creating a back-arc basin to the east and a fore-arc basin to the west, separated by initially uplifted Yoma suture zone.

Central Burma or Irrawaddy Basin represents the back-arc basin and Arakan-Yoma folded belt and its western extension up to Chittagong-Tripura hills, a part of which is the Chittagong Hill Tracts, representing the fore-arc basin. The thick sediments deposited in the Irrawaddy Basin during Miocene and Lower Pleistocene time are exposed in the Chittagong and Tripura hills. Hence, with the inception of convergence of the Indian Plate and the Tertiary sediments deposited in the fore-arc basin, the region was uplifted during Miocene orogeny and followed by Pleistocene orogeny to form the present Arakan Yoma Mega-anticlinorium and its western extension covering Chittagong-Tripura mountain belt.

The oldest rock unit exposed is the Bhuban Formation of the Surma Group of Miocene age. No exposed rock older than the Miocene Bhuban Formation is known yet. The Palaeogene sediments are subsided to a great depth and have not been encountered in any well. The Surma group of sediments is overlain by the Tipam Group of Plio-Pleistocene age. The Dihing Formation of Pleistocene age has scattered occurrence in the region. 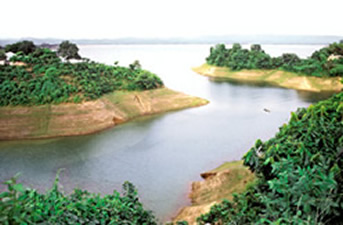