Betel Nut (supari) fruit of a tall, graceful Asiatic betel palm, Areca catechu, chewed with lime and pan (betel leaf). The tree is slender, erect, up to 30 m tall with a smooth trunk and a crown of large pinnate leaves 1-2 m long. The fruit is an ovoid drupe up to 5 cm long, orange coloured when ripe, with hard fibrous endocarp and a single seed, commonly called a nut. 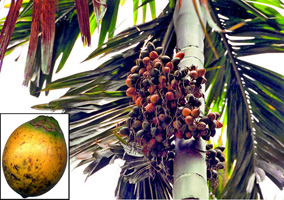 The Philippines and the Nicobar Island have been known as the centres of origin of betel nut. Various types have been described differing in size and shape of the fruits. The tree is very sensitive to drought and in areas with less than 1250 mm of rainfall per annum irrigation is usually necessary.   It can be grown on a variety of soils, but clay loam seems to be preferred. Weather conditions are favourable for the cultivation of betel nut in most places in Bangladesh. Total area under the crop has been estimated at about 36,500 ha. The average yield per acre is about 3.45 m tons and total annual production is about 26,500 m tons. Although grown in all districts, barisal, rangamati, and khulna produce most of the betel nut. It is also grown in homestead gardens in cities and rural areas.

Betel nut may be chewed alone, but the usual practice is to wrap small slices or pieces of the nut in a leaf of betel pepper, to which lime is added. It is chewed after meals and on all special occasions. The nut is used as an astringent, stimulant and anthelmintic. The powdered nut, in doses of 10 or 15 grains every three or four hours, is useful in checking diarrhoea arising from debility. The dried nuts, when chewed produce a stimulant effect. The young nut possesses decided astringent properties and is prescribed in bowel complaints and bad ulcers. [AKM Rafiul Islam]