Bhawal Estate was the second largest zamindari in Eastern Bengal, just next to the dhaka nawab estate in extent and income. The ancestors of the Bhawal raj family are said to have been inhabitants of Bajrayogini under Munshiganj. One Bala Ram of this family served as diwan to Daulat Ghazi, zamindar of Bhawal pargana in the late seventeenth century. Bala Ram and his son Sri Krishna could manage to please the diwan murshid quli khan and wrest the zamindari of the pargana from the Ghazis. 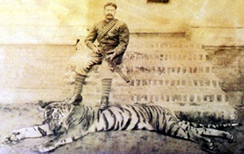 To facilitate revenue collections Murshid Quli Khan deliberately ousted many Muslim zamindars and replaced them with the Hindu entrepreneurs. The Ghazi estate of Bhawal was one of those zamindaris that lost their rights due to Murshid Quli Khan’s revenue collection policy. Sri Krishna was installed as the zamindar of Bhawal in 1704. Since then his family had been in uninterrupted control of the pargana down to the abolition of zamindari system in 1951.

During the post-permanent settlement period, the zamindari was expanded manifold through new acquisitions by purchases. In 1851, the Bhawal family bought the zamindari of J. wise, an indigo planter. Through this purchase the family became the owner of the entire Bhawal pargana. According to revenue records, the Wise Estate was bought for Rs 4,46,000, an enviable sum for the time.

In 1878, Kalinarayan Roy Chowdhury got the hereditary 'raja' title from the British raj. His son Raja Rajendra Narayan Roy Chowdhury further extended the zamindari; the Bhawal raj thus acquired landed estates in Dhaka, Mymensingh, Faridpur and Bakerganj, and thus became the second largest zamindari in Eastern Bengal. Curiously, the Raja of Bhawal mostly owned the city of Dhaka itself and its environs, though the Dhaka Nawab family apparently seems to be the biggest zamindar in the Dhaka city. Of course, Dhaka Nawab family possessed extensive zamindari estates spread out in many districts and their headquarters was in Dhaka. According to the survey and settlement records of 1917, the Bhawal family possessed 4,59,163 acres of land spread over 2,274 mouzas. The estate paid Rs 83,052 in government revenue and earned in rental income, after all deductions, of Rs 4,62,096 in 1904. Unlike most other zamindars who preferred to live in cities as absentee proprietors, the Bhawal raja resided at Jaidevpur in the heart of the estate.

The zamindari management of the Bhawal raja was unique in the sense that the raja himself managed the zamindri. Traditionally, most of the large zamindars were dependent on naibs and gomosthas for estate management. But the Bhawal raja attended the kachhari regularly. The whole zamindari was divided into many circles. Each circle was in charge of a mofussil naib who was assisted by a tahsildar, several mohrars, jamadars, peons, sweepers and coolies. Besides, there were lathials to keep the recalcitrant raiyats under control. Every village had zamindari mandal through whom the rent collection of the village was made. A periodic survey of each village was made with a view to enhancing the rent rate or otherwise. Unlike most other zamindars, the Bhawal raja did not normally create madhyasvatvas (intermediate tenures). The head kachhari of the zamindari was at Jaidevpur. The kachhari had a gadi (pretension of a throne) for the raja. The chief executive called diwan was assisted by a deputy diwan, several naibs and gomosthas. For every unit of the zamindari there was a desk in the diwankhana and every desk had necessary officials of many denominations.

Raja Rajendranaryan Roy Chowdhury was the last great zamindar of the Bhawal estate. His diwan was kaliprosanna ghosh, a noted writer of the late nineteenth century. Rajendranarayan had three sons -Ranendra Narayan, Ramendra Narayan and Rabindra Narayan. He died in 1901 when his children were still minor and consequently the estate was brought under the Court of Wards, once in 1901 and again in 1904. All the children of the raja, as attested by a European house tutor, were utterly inattentive to education and moral training. All of them were growing sensuously and in ignorance. The second son, Ramendra Narayan, went to Darjeeling in 1909 for treatment. He was announced to be dead and cremated there. The other two sons also died soon one after another and the family appeared to be extinct. But actually the second son had disappeared and lived as a sanyasi and towards the end of 1920 made a dramatic and sensational come-back after twelve years to claim his right.

Thus started the famous bhawal case (1935) that made news and gossips all over Bengal and beyond for a decade and became the subject of literature, theatre and cinema in many languages of India. Ever since the Bhawal Case the zamindari succession became an extremely complex affair and consequently the management of the zamindari continued to remain under the Court of Wards down to 1950 when the zamindari system was abolished. The assets and liabilities, which could not be distributed after the abolition of the zamindari due to knotty succession questions and unresolved title suits, remained under the care of the Court of Wards during Pakistan period. Now the Board of Land Reforms, Government of Bangladesh, looks after the affairs of the former Bhawal Estate. [Sirajul Islam]