Administration Bheramara Thana was formed in 1906 and it was turned into an upazila on 7 November 1983. 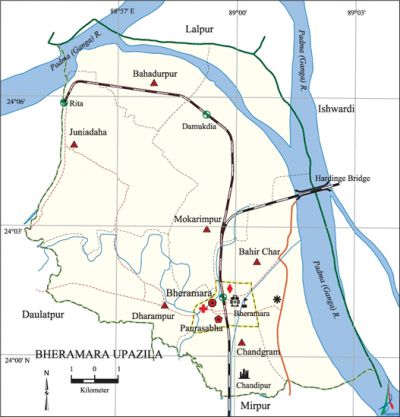 Historical events The peasants of the upazila participated in the indigo resistance movement at Shalghar Madhua in 1860. The people of the upazila also participated in the faraizi movement. During the war of liberation in 1971 the hardinge bridge of Bheramara was affected. Besides, the Pak army conducted mass killing and plundering in the area; they also set many houses on fire.

Religious institutions Mosque 620, temple 10, tomb 2, most noted of which is Satbaria Mosque.

Hats, bazars and fairs Hats and bazars are 30, fairs 2, most noted of which are Satbaria, Juniadaha, Golapnagar, Kuchiamora, Bahadurpur, Arkandi hats and Ghora Shaha Mazar Mela.