Bhurungamari Upazila (kurigram district) area 236 sq km, located in between 26°02' and 26°14' north latitudes and in between 89°36' and 89°48 east longitudes. It is bounded by west bengal (India) and assam (India) on the north, nageshwari upazila on the south, Assam on the east, West Bengal on the west. Bhurungamari upazila has 10 enclaves.

Administration Bhurungamari Thana was formed in 1915 and it was turned into an upazila on 10 April 1983. 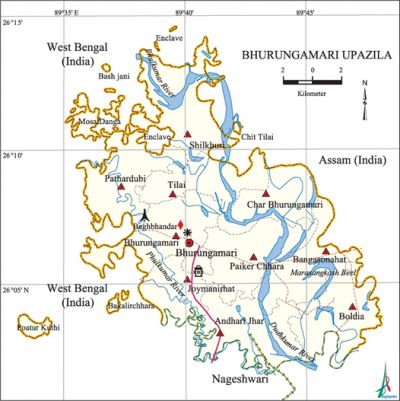 History of the War of Liberation On 11 November 1971 while attempting to liberate Bhurungamari from the Pak army 59 members of the Indian allied force including Major Ram Singh and five freedom fighters were killed. On 20 November, a serious encounter was held to liberate Raiganj in which more than one hundred Pak soldiers were killed and so were freedom fighter Lt Abu Sayed Muhammad Ashfaqus Samad (Bir Uttam) and some of his compatriots. Besides, the freedom fighters destroyed Sonahat Bridge on 26 November in order to obstruct the entry of the Pak army into the upazila.

Marks of the War of Liberation Mass grave 1 (Behind the residence of TNO); Mass killing site 1 (backyard of the Hospital.); about 30-32 human skuls have been discovered from under ground at village Baghbhandar inBhurungamari union.

Natural disasters 'The cyclone of 1957 and the flood of 1993 caused heavy damages to settlements and properties of the upazila.