Biogas based on the phenomenon of microbial decomposition of organic matter in the absence of air resulting in a gas called biogas. It mainly consists of methane and carbon dioxide. This biological conversion is better known as anaerobic digestion. A natural process termed as microbial methanogenesis takes place during anaerobic digestion. Methanogenesis has traditionally been considered a two-step process involving acid-forming bacteria which hydrolyse and ferment organic compounds to fermentation. Products such as organic acids, alcohols, neutral compounds, hydrogen and carbon dioxide, and methane-forming bacteria convert these fermentation products to methane and carbon dioxide. 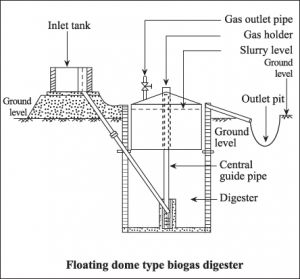 The energy scenario of Bangladesh is dominated by traditional energy sources. They supply about 64 percent of the total energy consumption. These are based on agricultural residues (40.9%), animal dung (14.3%) and fuel-wood (8.7%). The livestock survey of 1983-1984 estimated that of the total yearly dung production of 11.60 million tons (dry dung), 31 percent was used as fuel directly in the form of dung cakes and 68 percent was used as manure applied directly in the field, while the balance was used for other purposes. Unfortunately, the direct burning of cow dung causes a total loss of fertiliser and pollution of the atmosphere, whereas applying it directly to the field causes a total loss of fuel and pollution of the atmosphere. On the other hand, the production of biogas through anaerobic digestion would not only guarantee reliable and cleaner renewable energy sources but would also provide treated slurry as fertiliser.

Bangladesh has a great potential for development of biogas technology. The cattle population including buffaloes is about 24.19 million (1996), which yield about 242 million kg of cattle wastes per day. This waste has a potential of production of 3.19109 cu m of gas. If even 50% of the cattle wastes could be used for biogas production, about 1.36 million biogasdigesters of the capacity of 3 cu m could be set up. A biogasdigester of 3 cu m capacity could provide the energy requirements for cooking and lighting of a family consisting of 7-8 members. Such a digester would require 60-70 kg cow dung which could be obtained from 5-6 cattle or 3-4 buffaloes. Apart from the benefits of energy, the treated slurry could be used as fertiliser, since it is a bonus from biogas production. 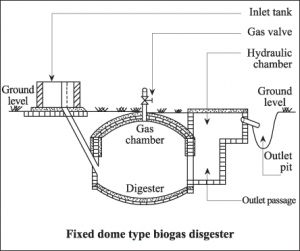 Biogas technology programmes based on adaptive design and demonstration of family size biogasdigesters were initiated at bangladesh agricultural university, Mymensingh, and Bangladesh Council of Scientific and Industrial Research (BCSIR), Dhaka, in the early seventies. The first family size design of biogasdigester of capacity of 3 cu m was installed at BCSIR in 1976. and was of the floating dome type. The typical floating dome digester is a brick-lined cylinder sunk in the earth, with a wall dividing the cylinder into two, and with inlet and outlet ports leading to the bottom of the tank. The price of such a biogasdigester was Tk 12,000. Subsequently, a lower cost design of the floating dome digester of capacity of 3 cu m was installed at BCSIR in 1981. The price of this came down to Tk 3,000 only.

Another biogas production technology programme to meet the fuel crisis for cooking was subsequently undertaken and 214 floating dome type biogasdigesters were installed under the supervision of the Institute of Fuel Research and Development at BCSIR. Unfortunately, the operating life of these digesters was 3-5 years because of leakage in the gas-holder of the digester. Because of this leakage problem, a fixed dome type family size biogasdigester with a capacity of 3 cu m was installed at BCSIR in 1991. A digester of this type varies somewhat in shape, but, unlike the floating type, everything is below the ground. Because it has a gas reservoir of fixed volume, the gas pressure varies. The digester pit is dug into the ground and then lined with bricks.

A biogas production technology programme was undertaken in 1999 and led to the installation of 5,000 biogasdigesters in Bangladesh that year. The most common size of digester is that for the small farm. A volume of about 3 cu m is suggested for five to six cattle and it is the smallest possible size. Bigger digesters are built for bigger farms and for institutional purposes.

To assess the investment potential on biogas production, it is essential to examine the economic benefits. The net benefit for a biogasdigester operated on slurry from cows in Bangladesh increases with an increase of the government subsidy. The net benefit is also highly sensitive to the price of fuelwood and the cost of construction of the digester. Thus, any increase in the price of fuelwood will encourage introduction of biogasdigesters. An increase in inflation would obviously make the installation of a biogasdigester more profitable over a period of time, whereas high interest rates would reduce the net present benefit and discourage the introduction of the biogasdigester. Although their cost is low in terms of the economics of a rich population, in terms of the economics of the people for whom they are designed the cost is often high. In some cases, cost is a factor limiting their further spread. However, whatever the economics or other limitations, there is no doubt that small digesters can serve as a major source of energy for single houses or small communities in rural areas of Bangladesh. [BK Bala]