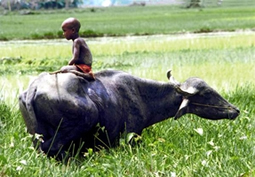 Buffalo (mahis) a name for several mammalian species of the order Artiodactyla, family Bovidae. These ruminant mammals are, in fact, inhabitants of the Northern Hemisphere and bear some similarity in appearance to cattle. Although often the name 'buffalo' is erroneously applied to the American bison, the latter has no relations with true buffaloes. The water buffalo or Indian buffalo, Bubalus bubalis is found in Southeast Asia, where it was domesticated at a very early period. Buffalo exists both as a wild and a domestic animal. As a truly wild animal, it is found in Nepal, Assam, the old Central Provinces and perhaps-other parts of India, Myanmar and Borneo. As a feral animal, roaming wild but descended from domestic stock, buffalo is also found in several other countries including Sri Lanka, Indonesia and Malaya.

Buffalo is a long-headed, large ox-like animal. It is massive and rather clumsy built. The Indian buffalo, standing nearly 1.8m (over 6 ft) has a dull black body, a straight back, and is very sparsely covered with short hairs. The large horns are triangular in cross section, spread outward and upward and approach each other towards the tip.

There are many domestic races in which the size, body build, and shape and size of the horns differ. Female buffalo gives birth to one young after a gestation period of 10 months.

Domestic buffaloes are mainly kept as draft animals and for milk and butter. In India and Pakistan there are some improved breeds, locally known as Ravi, Kundi, and Nilee. All these breeds occupy important place in milk production. The butter fat content of the milk is 6 to 10%.

In Bangladesh, there is no important breed of buffalo. Only in the districts of chittagong, noakhali, rajshahi, rangpur, dinajpur and bogra buffaloes are seen as draft animals used for ploughing and pulling carts. The total number of buffaloes in Bangladesh is about 4,57,000. The dearth of green grass is the principal limiting factor of raising buffalo in this country. An individual animal needs at least 30 kg of grass daily. The milk production of the local variety is also not very significant. [SM Humayun Kabir]