Boat though boat is used for pleasure and sport in many countries of the world, it is, on the other hand, one of the best means of communication in riverine Bangladesh. Besides, boat is used for carrying goods and catching fish. During the Rainy season, it has immeasurable usage. The driver of the boat is called Mazhi or 'Boatman'. Various parts of the boat include: Khol, Pata, Choi (shed), Mast or Dar, Pal (sail), Bhela and Bhela is made with banana tree. Since 1990s boats had been motorised which consequently converted the typical boat into motorised water-vessel. Those motorised boats became familiar as Shallow Boat. These boats are run by shallow pumps, generally used for irrigation, and with the application of local technology. 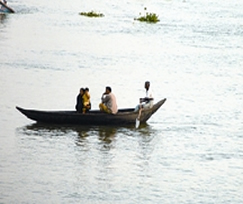 sampan is the most familiar among various types of boats, which have been depicted in the folklore, and literature of this country. Sampan floats on huge waves of the sea. Such kinds of Sampan boats are seen in Chittagong and Kutubdia. The front head of the boat is high and curved, but backside is strait. In case of necessity sail is used, sometimes there is none in the boat. Boat, driven by single boatman is used for carrying goods. It is 5.40-6.10 meters in length and 1.40-1.55 meters in wide. Once upon a time, big-size sampans having 12.80 to 14.65 meters and 4.60 to 5.20 meters length and wide respectively could be seen in Kutubdia region, but those are rare now. Three boatmen occupied those boats and it had triangular shaped sails.

Goina boat is medium in size: 7.60-12.80 meter in length and 1.80-3.00 meters in wide. Such kinds of boats were often seen in Kishorgonj region. In fact, it was used to carry passengers. The boat had the capacity to carry about 25- 30 people at a time. In addition, there were bigger Goina boats in Rajshashi region, which were about 14.60-18.20 meters in length. Since such boats were bigger, a great deal of people could be transported with it. Now those are in extinct.

In the past, the rich used to make trips by boats. Bojra was much popular to them. They converted the boat identical to a house and all kinds of facilities including food and lodging were laid out therein. Some boats had sails. Four boatmen used to sail it. The boat was approximately 13.72-14.65 meters and 2.25 to 3.20 meters in length and wide respectively. Bojra was often seen in Sirajgonj and Pabna area.

Boats touched the lives of the people so intensely that various types of funny games with boats were laid on. boat race is, at rest, a famous game. The boats used for race were 150-200 feet in length and on time of race it could hold 25-100 boatmen. In the past, Nababs and Badshas used to organise boat races. Their racing-boats were implicated by various attractive names; including Ponkhiraj (King of the birds), Jhorer Pankhi (Bird of the storm), Dipraj (King of the lake), Sonar tori (Boat of the gold) etc. Such kinds of boats were seen in Kishorgonj, Pabna, Mymensingh, Faridpur, Noakhali, Comilla etc.

The special purpose boats made by joining two altogether are in fact, boats for carriage. Those are 13.70-16.75 meters and 5.50-6.10 meters in length and wide respectively. These kinds of boat occupy 5-6 boatmen. 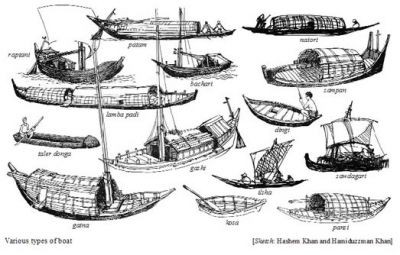 The fancy boat for kings and Badsha is called Moiurponkhi (Peacock bird). Since the front side of the boat is looked like peacock, it was called Moiurponkhi. That boat was 11.40-6.10 meters in length and 2.75 to 3 meters in wide. These boats require four sailors and had two sails.

In Barisal region, medium-size-boats, having 7.39-9.10 meters in length, are frequently used for catching fishes. It holds 3-4 boatmen. On the other hand, in Chandpur area, different kinds of boats are seen which are used for catching fish. The length of the boat may be 9-14-11.45 meters so far. It holds 8-10 sailors. Here in Chittagong, there are huge boats used for catching fish. The most familiar boat in Bengal area is called Dingi. The people of the coastal regions use these boats to cross the rivers and for other purposes. Since these boats are small in size, one sailor is enough to sail. At times, sails are hoisted on its top.

In Kushtia region, boats had been used to carry on business since time immemorial. Balar, a special kind of boat, is very popular there. Those boats are big in size and may carriage 12-56 tons of goods. Those boats could be 12-18 meters in length and 10-12 sailors pull the sculls. These boats lift two sails.

The boats of Khulna are identical to Balar, which are called Batnai or Podi which required 17-18 sailors to oar. Those boats were 15.25-21.35 meters in length and could carry 140-160 tons of goods. There were huge squared sail to this shop. However, such kinds of boats are not seen anywhere in Bangladesh. [Zobaida Nasreen]