Brahmanpara Upazila (comilla district) area 128.9 sq km, located in between 23°35' and 23°44' north latitudes and in between 91°03' and 91°11' east longitudes. It is bounded by kasba and muradnagar upazilas on the north, burichang upazila on the south, tripura state of India and Kasba upazila on the east, debidwar and Muradnagar upazilas on the west.

Administration Once Brahmanpara was a part of Kasba thana and it was included in Burichang thana in 1954. In 1968, Brahmanpara police out post was established and Brahmanpara thana was formed in 1876. It was turned into an upazila in 1983. 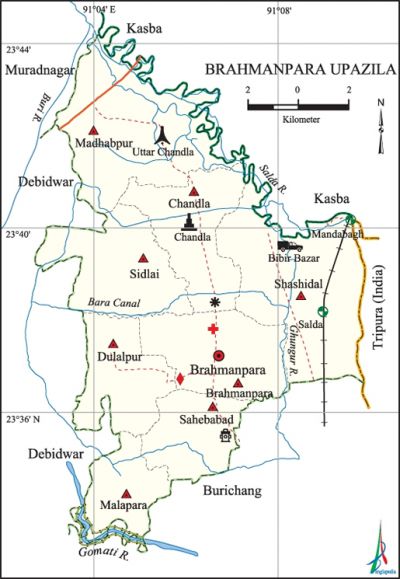 Archaeological heritage and relics Tombs of Panch Pir (1815) on the west side of Shashidal Railway Station, Chandla Shiva Mandir (eighteenth century), Math (1822) and place of pilgrimage at Harimangal, Tomb of Karim Shah.

History of the War of Liberation This upazila was under Sector 2 during the war of liberation. The civilians of the upazila in collaboration with the members of the Bangali EPR personnel 'killed three members of the Pak EPR by beating on 27 March at Shashidal. Eighteen Pak soldiers were killed in an encounter with the freedom fighters at a place near the Chhakarmar Bridge of the upazila at the end of June 1971. Fifteen Pak soldiers including one Captain were killed in an encounter with the freedom fighters of 4th Bengal Regiment at Holaimuri on the bank of the river Ghungur on the Kasba-Brahmanpara border. The Pak army established camp at the nearby Chandla and Saitshala villages and killed more than one hundred persons. Besides, encounters between the freedom fighters and the Pak army were held in many places of the upazila including Chandla, Bara Bhangania (Jirul), Tatera on the northern side of Sahebabad Bazar, Sidlai, Lalla, Malapara, Shashidal Deous, Kalamuria Bridge at Mukimpur, Mirpur (Madhabpur) and at South Tetabhumi.

Marks of the War of Liberation Mass grave 1 (on the bank of a pond at Harimangal near the Railway); mass killing site 2 (premises of Bhuiya Bari at north Chandala and premises of Prabodh Kumar Das at south Chandla).