Calcutta Town Hall, The was the largest building in Calcutta where public meetings of all descriptions took place, and people of all shades of opinion in Calcutta had an access to it. Built in Doric architectural style, the origin of the building can be traced back to a meeting held in Le Gallais Tavern in 1791. The conveyors of the meeting decided to raise subscriptions for 'the erection of a public building for general accommodation of the settlement'. Subsequently, in yet another meeting held on 21 February 1804, European citizens decided to construct a town hall with the purpose of holding meetings and formal receptions. 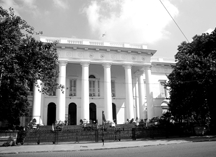 The officials of the east india company did not disagree with these sentiments, but as they were unwilling to make any capital investment in the building, necessary funds were raised through public lottery. Plan for the proposed hall was sanctioned in 1807 and Col J Garstin was put in charge of construction. Completed in 1813, it was handed over to a management committee known as The Town Hall Committee. Thereafter the management of the Hall underwent periodic changes and finally, in 1867, the Hall became the property of the Municipality (later on Corporation) of Calcutta.

The Town Hall was spacious enough to accommodate the social needs of the European community of the settlement. A two-storied structure above a brick-vaulted foundation, its ground floor was about 7.01m high and contained a marble hall and a few smaller rooms to use for various purposes. The upper floor with a teak-planked floor was about 9.14m high and divided by double rows of pillars into a central hall and two aisles. At the northern end, there was a music gallery and at the eastern side, a raised platform. Some smaller rooms were used for cards and supper rooms. A series of steps from the road led to the colonnaded front portico of the solid rectangular building. The carriage entrance was on the north under another lofty covered portico.

Initially the Hall offered the Europeans of Calcutta a permanent public space where they could meet and discuss matters of common concern. Apart from balls and suppers, contentious issues were often discussed in public meetings. Even the Eurasians voiced their grievances in different meetings held in the Hall. At one such meeting, held on 28 March 1831 henry derozio made attacks on Europeans for having ignored the plight of the Eurasians. Initially, the Bengali bhadralok had an abiding faith in the bona fide of the British rule. Therefore, joint meetings by Europeans and Indians were quite common until mid nineteenth century. The calcutta school-book society held several of its meetings in the Hall. A hearty sendoff was accorded to Sir Hyde East, a founding patron of the hindu college, at the Town Hall on the eve of his departure for England in 1821. In a Town hall meeting held on 15 December 1829, Raja rammohun roy and dwarkanath tagore openly supported the cause of the European planters in Bengal. On 9 April 1836 about 200 leading Indians assembled in the Town Hall to express their gratitude to Sir charles metcalfe for all the good works he had done. The Landholder's Society was also formally launched at a public meeting held in the Hall on 19 March 1838.

In course of time, however, Indians were made to realise the limits of inter-racial collaboration in a colonial setting. Actually, the Black Acts controversy put this interracial collaboration to a very serious test. Accordingly, joint meetings gradually became infrequent till they ceased altogether. As a matter of fact, in the second half of the nineteenth century, with the sharpening of conflict between politically conscious Indians and racially arrogant Europeans, the Town Hall meetings became increasingly more restrictive. Meanwhile, a galaxy of Indians like Raja Rammohun Roy, radhakanta dev, Dwarkanath Tagore, Ramanath Tagore, Motilal Seal, SK Lal Mohammed, rajendralal mitra, Aga Mirza Shirazi and others regularly held meetings in the Hall in course of the early nineteenth century. The Sadharan Brahma Samaj was formally launched in a Town Hall meeting of 15 May 1878. The indian association and the indian national congress made use of the Hall on different occasions. In the 1890s jagadish chandra bose demonstrated his early experiments in electric waves in the Town Hall. rabindranath tagore delivered his famous speech Kantha Rodh in the Hall in 1898.

The first decade of the twentieth century was an extremely eventful period in the history of the Town hall. The swadeshi movement was formally launched from a Town hall meeting of 7 August 1905. In later years, Satyendranath and Rabindranath Tagore, Subodh Chandra Mallik, abdur rasul, Yusuf Khan, abdul halim ghaznavi, ramendrasundar trivedi, Samsul Huda and others periodically visited the Hall and addressed meetings.

After the First World War, the political climate of the city began to change and the Town Hall could no longer remain the hub of the city's political activity. Alternative sites like Shraddhananda Park, Deshbandhu Park, Wellington Square, Hazra Park and the Ochtorloney Monument emerged as new venues for political activities. As a result, the Town Hall gradually lost its aura and eventually became what it had initially been, a place for ceremonial gatherings. After the introduction of the dyarchy in 1919 the Town Hall was used as the Council Chamber of the Bengal Legislative Council.

In the inter-war period Bengal luminaries occasionally met together in the Town Hall. Rabindranath Tagore, Sir CV Raman, Sir Prafulla Chandra Ray, Dr Sarvepalli Radhakrishnan, Shyama Prasad Mukherjee, Sir nilratan sarkar, Ramananda Chatterjee and others graced the Hall and the meetings held therein during this period. But the locus of the politics of agitation having already shifted to streets and parks, the Town Hall meetings were more in the nature of felicitation to dignitaries. Now it is merely an adjunct of the Calcutta Corporation building. [Basudeb Chattopadhyay]