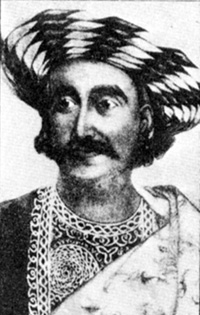 Tagore, Prince Dwarkanath (1794-1846) entrepreneur, and founder of the great Tagore family of Jorasanko, Calcutta. The contemporaries called him a prince because he had been to Britain where he was first described as a prince by the people coming in contact with him and also because his lifestyle in Calcutta was marked by princely grandeur and influence. Father of devendranath tagore and grandfather of rabindranath tagore, Dwarkanath was one of those banians and mutsuddis (agents and officers of European traders) who made the first generation of the Bengali entrepreneurs and socio-political activists. The first person of the Thakurs to leave their parental home in Jessore and join the rank of banians to the Europeans was one Panchanan, who worked with the French as a banian in the late 17th century.

Like most other successful Brahmin families of Bengal the Thakurs also claim their ancestry from those pure Brahmins believed to have been invited by King Adisura from Kanauj. But objective researchers assert that they belonged to a local and degraded Brahmin subcaste called Pirali Brahmin and that they had no interaction with the superior Brahmin caste. However, the founding member of the modern Tagore family (anglicised form of Thakur) was Joyram, an Amin of the 24-Parganas in 1760-62 who had four sons; one of whom was Nilamani Thakur (d 1791), who served as a serestadar in Chittagong district.

He became affluent enough to leave the low lying ancestral home at Pathuriaghata built by Joyram and constructed an imposing new home at Jorasanko where Rabindranath Tagore was born and raised. Nilmani's son, Ramlochan, a rich banian and businessman had adopted Dwarkanath. The family name Thakur (lord) is said to have been conferred by the people of the fishing village Govindpur, who felt to have been privileged by being served by the Pirali Brahmins ritually.

However, the members of the Thakur family proved to be immensely entrepreneurial. Such a trait was attributed by Dwarkanath Tagore to a sense of injury resulting from the indignity that other superior Brahimins had inflicted on them. No member of the Thakur family including even Rabindranath could set up any matrimonial connection with the superior Brahmin families due to alleged caste inferiority.

Under Robert Gutlar Fergusson, a British advocate, Dwarkanath learnt, as an apprentice, the laws of the permanent settlement and also the laws and procedures of the supreme court of Calcutta, sadr and zila courts and started his legal career very successfully in 1815. Soon he started expanding the modest zamindari estate that he inherited from his father, Ramlochan. In 1830 Dwarkanath bought in auction Kaligram zamindari in Rajshahi district and Shahazadpur in Pabna district in 1834. His zamindari had many partners and co-purchasers. But Dwarkanath held four large estates - Berhampur, Pandua, Kaligram and Shahazadpur without partners and he placed them in trust for his sons and their descendants in 1840. The unique aspect of Dwarkanath's zamindari management was that he looked at it entrepreneurially, not feudally, as was the normal habit of his contemporary counterparts. He engaged several European experts to manage his estates.

Dwarkanath made his early fortune from his lucrative service as a serestadar (1828) and later diwan, under the Board of Customs, Salt and Opium. He served for twelve years as a diwan. Alongside his service, he joined credit market as a moneylender to salt manufacturers and others, a practice that was interpreted by his colleagues and contemporaries as sheer bribe in disguise. Incidentally, once he was accused officially of the alleged traffic, but in the absence of concrete evidence the court acquitted him with honour. In addition to moneylending, he had laid out capital in export trade with a famous farm, Mackintosh & Company. He had shares in Union Bank when it was established in 1829. All these including zamindari control were pursued alongside his service with the Company's commercial department.

In 1835 the government honoured Dwarkanath with the post of Justice of the Peace, a honourary position newly opened to Indians. By 1840 he stood at the summit of his entrepreneurial life. He had investments in shipping, export trade, insurance, banking, coal mine, indigo, urban real estates and in zamindari estates. He engaged several European managers to look after his concerns.

Being encouraged by his European and native friends, Dwarkanath Tagore resolved to visit Britain like his friend and philosopher raja rammohun roy. On 9 January 1842, he boarded his own steamer, the India, for Suez. His European physician Dr MacGowan, his nephew Chandra Mohan Chatterjee, his aide-de-camp Paramananda Moitra, three Hindu servants, and a Muslim chef accompanied him. In London the British Prime Minister Robert Peel; President of board of control Lord Fitzgerald; Prince Albert, the Duchess of Kent, and Queen Victoria received him. He spent June 23 with the Queen, reviewing troops. On July 8, he was invited to a dinner with the Queen. The Queen noted in her diary, 'The Brahmin speaks English remarkably well, and is a very intelligent, interesting man' (Queen Victoria's Journal, July 8, 1842).

Dwarkanath left England on October 15 for Paris, where he was received by the French king Louis-Philippe at St Cloud on October 28. He returned to Calcutta in December 1842. The business recession of the early 1840s and his newly acquired princely lifestyle led to the collapse of his business empire and made him a debtor to many people and companies. The debts accumulated until his death were so huge that it took his son, Devendranath Thakur, almost all his life to make the family free from encumbrances. It was not only Dwarkanath, whose businesses went red in the hard days of early 1840s, but also many others like him were ruined due to the depression.

Dwarkanath was truly the product of the depression of 1830-33 and victim of that of the 1840s. But his greatest success lies elsewhere. Collaboration in trade and commerce with the Europeans had long established precedents, but never before a Bengali had received recognition from them as an equal partner. Dwarkanath had broken that tradition and became an equal 'partner in empire' by his own right. [Sirajul Islam]