Chamkatti Mosque located at Gaur on its Indian side, the mosque is possibly named after the Chamkatti community (who were Muslims); whose descendants still reside in Chalispara, near Old Maldah. According to Creighton they were devotees, who in religious frenzy, used to gash themselves with knives and were therefore called Chamkatti (skin cutters). 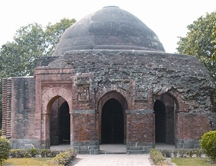 It is a single domed square mosque, built of bricks; its interior shows stone facing, especially at the lower courses. The square prayer hall, which measures 7.20m a side internally, is covered with a large hemispherical dome carried on squinches and further supported by stone pillars.

Five entrances - three in the east and one each in the north and south enter the prayer chamber. The mosque is provided with a single mihrab in the west wall, which is gracefully decorated with different types of floral motifs. Chain and bell motifs are also noticed. There is a verandah on the eastern side, covered by groin-vault.

ah dani thought that the architectural features of this mosque have been derived from the eklakhi mausoleum. At the Eklakhi the Bengali masons tried to build a large dome over a square room by changing it to an octagon. At the Chamkatti mosque they have succeeded in keeping the interior hall square. The method adopted is simple. Instead of turning the square into an octagon, they used eight stone pillars; one at each angle of the octagon and on them rested the arches and the squinches, which supported the dome. The stone pillars were thought sufficient to support the big dome. Henceforth this method became very common. The use of glazed tiles bordering the panels makes a graceful setting.

The date of construction of the mosque is not definitely known. alexander cunningham ascribes to it an inscription dated AH 880 (AD 1475) which puts it in the reign of Yusuf Shah of the later iliyas shah dynasty. Certainly, the style of the mosque conforms to this period. [Sultan Ahmad]