Eklakhi Mausoleum at Hazrat pandua, traditionaly known as the mausoleum of jalaluddin muhammad shah, son of raja ganesha, is the earliest of the extant architectural monuments of its type in Bengal. The inspiration must have been derived from the tomb of Sultan iltutmish (c 1236 AD), which is located behind the Quwwatul Islam Mosque in Delhi, through the tomb of Ibrahim Bayyu in Bihar Sharif (1353 AD). It must be remembered tomb structure was not popular in early Islam and gained popularity only with the coming of the turks. The earliest known such square structure is the tomb of Ismail, the Samanid at Bukhara, the original model being perhaps the chahartaq, the four doored Sassanian fire-temple of Iran. Tradition goes that a lakh tankas was spent in its construction and hence the name Eklakhi. The date remains unknown, but generally is taken as the death year of Jalauddin (1433 AD). 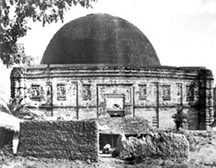 The building, situated to the southwest of the grand adina mosque, is made of brick, and stands at a little distance to the northeast of the qutb shahi mosque, built in honour of the saint nur qutb alam. Its dimensions are 24 m' 22.7m. The inner diameter of the crowning hemispherical dome is 14.80 m. The dome rests on squinches on the four corners. The exterior of the building is strengthened by four octagonal towers at the corners, and is opened by four doorways, one each in the middle of each side. Pointed arches with lintels crowning the doorjambs span the doorways, a feature derived from the original Hindu temples through Tughlaqi architecture. The jambs and the lintels are marked by carved deities - that of the lintel of the southern entrance being the figure of Visnu, and of the jambs those of dvarpals (Darpala), a proof of their appropriation from Hindu temple buildings. Inside the building, there are the remains of three sarcophaguses. The western one seems to be the tomb of the Sultan, the middle one that of his wife, and the eastern one that of his son Sultan ahmad shah. A peculiar feature of the inner spacious room is its four alcoves built at the corners, often taken as cells for readers of the Quran.

The ornamentation of the building consists of braced string-mouldings of the corner towers, a divider moulding of the whole external appearance, and the cornice mouldings in three tiers beside the terracotta plaques in panels underneath - now broken - imitated from the designs of the adina mosque. The interior of the dome was once ornamented with plaster but is now dilapidated. The dome, like all other domes of the Sultanate Bengal, is without a final, but appears to be covered with a round rim in the form of a hormica, a Buddhist feature. The hemispherical dome is in fact very much in the shape of the domes of the great stupas, for example, those of Sanchi (1st century BC) and Manikyala in Punjab (2nd century AD).

The chief contribution of this structure to Bengal architecture is through its Bengalisation. This entailed making the cornice carve downward from the middle to the sides in imitation of the sloping roof of Bengali huts. Once established this practice continued throughout the period of Sultanate architecture in Bengal, not only in single domed structures, but also in multi-domed large mosques. It also set the example of single domed structures in Bengal, not only in Sultanate building art, but also in Mughal architecture. Its great contributions to the development of the Bengal style could be seen fully in the later half of the 15th and early 16th centuries. [ABM Husain]