Char a tract of land surrounded by the waters of an ocean, sea, lake, or stream; it usually means, any accretion in a river course or estuary. It includes all types of bars including both lateral (point-bars) and medial (braid-bars). In the dynamics of erosion and accretion in the rivers of Bangladesh, the sand bars emerging as islands within the river channel (island chars) or as attached land to the riverbanks (attached chars), often create new opportunities to establish settlements and pursue agricultural activities on them. A distinction should be made between island chars, which are surrounded by water year-round and attached chars, which are connected to the mainland under normal flow. Once vegetated such lands are commonly called chars in Bangladesh.

Chars in Bangladesh can be considered a 'by-product' of the hydro-morphological dynamics of its rivers. The Irrigation Support Project for Asia and the Near East (ISPAN) study indicates that the chars that are not eroded in the first four years of their emergence could be used for either cultivation or settlement by the end of these four years.

bangladesh bureau of statistics (BBS) report of 1997 suggests that in the relatively lower reaches, where land is more fertile, cropping intensity in the chars appears to be between 150 and 185, which is quite similar to the average intensity of 165 for the entire country. However, the island and attached chars appear to be less productive than adjacent mainland areas. The major reasons for this are the relatively less favourable soil conditions in some of the chars, uncertainties caused by erosion and frequent floods.

Although both river water and groundwater are abundantly available in chars, irrigated crops are scarce in many of the chars except for the ones within the upper meghna river. Forestry has also been successful in some of the chars. The perennial availability of water in the rivers provides year-round opportunities for fishing to many of the char communities.

Many of the chars have extensive areas of grasslands. These are used as grazing lands for the cattle. Catkin grass, which grows quite extensively on chars during the early period of vegetation, is used as thatching material. In some chars there are good prospects for sand mining, which can be properly exploited to benefit from the increasing demand for sand as a construction material.

The chars are extremely vulnerable to both erosion and flood hazards. Recent analysis of time series satellite images indicates that over 99% of the area within the riverbanks of the jamuna had been char at one time or another during the 27-year period of 1973 to 2000. The same analysis shows that about 75% of the chars persisted between one and nine years, while only about 10% lasted for 18 years or more. In certain areas, however, the chars can be quite stable (for example, in the Upper Meghna area).

During the period of 1984 to 1993, char areas increased in all rivers, except in the Upper Meghna. The net increase of chars during this period amounted to 36,000 ha. The effects of riverbank erosion and widening of the river channel on the people living in chars have been significant. During 1981 to 1993, a total of about 729,000 people were displaced by riverbank erosion. More than half of the displacement was along the Jamuna.

Each year a large percentage of the chars get flooded. The flooding, if it comes early, can damage the crops in the fields. People in chars build their homesteads on the highest available land and, if they stay there for any length of time, they further elevate their homesteads on built-up plinths to avoid annual inundation. The island chars are found to be flooded more extensively than the attached chars. Among the chars within different river reaches, those within the Ganges are found to be most extensively flooded.

The Jamuna Within the braided belt of the Jamuna, chars have different sizes. An assessment of 1992 dry season Landsat image shows that the Jamuna contained a total of 56 large chars, each longer than 3.5 km. There were an additional number of 226 small chars, varying in length between 0.35 and 3.5 km. This includes sandy areas as well as vegetated chars. 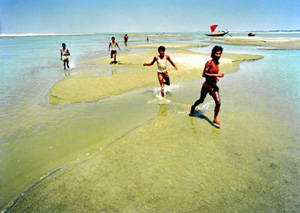 During 1984-1992 period, the area within the banks of the Jamuna has increased by 15%, out of which the increase in sand area accounts for more than half. Increases in water area and vegetated land area account for about one-sixths and one-thirds of the total increased area respectively. This signifies that widening of the braided belt of the Jamuna and corresponding floodplain erosion during the above period has been compensated to a substantial extent by the increases in sand and vegetated land areas. In the Jamuna the period between 1973 and 2000, chars have consistently appeared in the reaches opposite to the Old Brahmaputra offtake, north and east of Sirajgani and in the southernmost reach above the confluence with the Ganges.

The Ganges' The process of char formation in the Ganges is quite different from that of the Jamuna. These two rivers have rather different hydromorphologic and planform characteristics. The dynamics of chars is more complex in a braided river like the Jamuna than in a meandering river like the Ganges.

Widening of the Ganges was attributed to the migration of its meandering bends. As the bends migrated within the active corridor, chars built up in the direction of the migration. Often the chute channels are not as dynamic as the anabranches in the Jamuna or the main channel of the Ganges river. Therefore, the stability of the chars in the Ganges is higher than in the Jamuna River, except in the reaches where the planform of the river shows braiding characteristics.

The Padma' In the dry season of 1993, the Padma had a total of 13 accreted island chars, each longer than 3.5 km and an additional 18 island chars were each between 0.35 and 3.5 km long. These islands include vegetated char lands and sand masses.

The presence of chars is related to the width of the river. The Padma is a single channelled stream at Mawa and no char exists there. In the river reaches where the width is 12-15 km, wide and long island chars are visible. Char erosion and accretion depends on the migration of the meandering bends of the river. The area of attached chars is higher than that of island chars. The area of vegetated chars in the Padma is much less than that in the Jamuna or the Ganges. Vegetated land area covered only 12% of the total within-bank area in 1984. In 1993, the vegetated area increased to 20% of the total within-bank area.

The Upper Meghna The chars in the Upper Meghna river are quite stable. The river is a multi-channelled stream, consisting of parallel channels, which behave as separate meandering rivers rather than forming a braiding river.

Therefore, unlike the chars in a braided river, the chars here are very stable. The chars in this river are almost exclusively island chars. Most of these are more than 70 years old. Char area of the river constitutes 38% of the total area within the banks.

The Lower Meghna The characteristics of char dynamics at the confluence of the Padma and the Upper Meghna rivers are different from those in the Lower Meghna river downstream of the confluence. At the confluence the river has widened, which has resulted in an increase in char area. The widening of the river during 1984-1993 resulted a loss of about 4,500 ha of land. The increment of vegetated land during 1984-1993 was about 3,000 ha. The vegetated land area in 1984 was 10,500 ha, constituting about 30% of the total area within the banks.In the part of the Lower Meghna downstream of Chandpur, the situation is completely different.

Cultivation and settlement Of all the rivers, the Jamuna has by far the highest land area under chars. In 1992, the total area of char in the Jamuna was about 100,000 ha, compared to 75,000 ha all other rivers together. Also, in terms of percentage of total within-bank area covered by chars, the Jamuna has a higher figure than the other rivers. Thus, while this figure works out to be 45% for the Jamuna, the corresponding figures for the Ganges and the Padma are 30% and 20% respectively. The figure for the Lower Meghna is 20%, while that for the Upper Meghna is 40%. The soil and water conditions in the chars of all river stretches except for the northern part of the Jamuna offer opportunities of settlement as well as agricultural activities.

In the upper reach of the Jamuna, newly accreted soils consist mainly of coarse sand and are less suitable for agricultural activities. In the Lower Meghna, saline waters intrude only during the dry season, with limited impacts on char environment. Where soil and water conditions are favourable, cultivation and settlement development are constrained by the instability of chars and flood hazards. There are few stable chars in the Jamuna, Ganges and Padma rivers, while as mentioned above all chars in the Upper Meghna River are very stable. Chars in the flooding Lower Meghna river are relatively new and little can be said about their stability.

The instability of the chars in the Jamuna is inherent in the dynamic characteristics of this braided river. The earthquake of 1950 in Assam and adjacent areas might also have contributed to the instability of the Jamuna chars. Due to this earthquake, huge amounts of sediments might have been dumped into the river, which travelled downstream during subsequent decades. As the total supply of sediments exceeded the transport capacity of the river, sediments were gradually deposited in the riverbeds.

To compensate for its reduced water-carrying cross section, the river eroded substantial parts of its riverbanks. This resulted in a continuous process of char formation and river widening in the Jamuna during the last 27 years (average widening 125 m/year), whereby relatively fine bank material was eroded and coarser material got accreted.

Analysis of recent satellite images show that the rate of widening of the Jamuna has been reducing since the early nineties. The Padma has been showing an increasing trend of widening in the last years. This could result in the formation of more chars in the area. In the Ganges the increase of sediment supply might be due to processes of deforestation and growing intensive cultivation of the upstream.

Population The total population in the chars during 1993 works out to be about 631,000. The majority of these people (65%) live in the Jamuna chars. The char population in 1993 represents a 47% increase over the population in 1984. The national population growth over the same period is estimated to be 26%. Thus the growing importance of chars in providing land for human habitation in Bangladesh.

The socio-economic conditions of people living in chars vary widely between rivers and sometimes even between the upper, middle and lower reaches of the same river. The life of the char people is closely related to variations in the dynamics of river and char formation as well as the associated erosion and flood hazards. [Sifatul Quader Chowdhury and Masud Hasan Chowdhury]