Chhatak Upazila (sunamganj district) area 434.76 sq km, located in between 24°49' and 25°06' north latitudes and in between 91°27' and 91°49' east longitudes. It is bounded by Meghalaya state of India and companiganj (sylhet) upazila on the north, jagannathpur on the south, Companiganj (Sylhet), sylhet sadar and bishwanath upazilas on the east, dakshin sunamganj and dowarabazar upazilas on the west.

Administration Chhatak Thana, now an upazila, was formed in 1908. 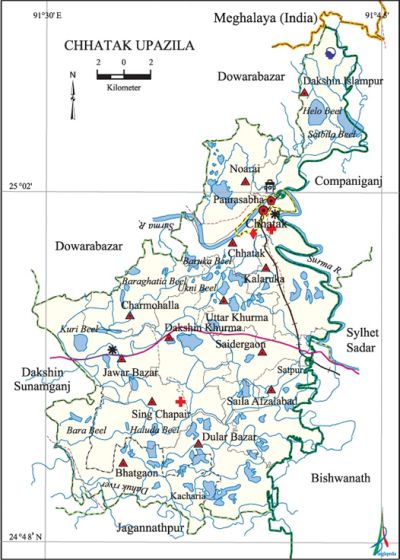 Historical events The people of Chhatak, under the leadership of Ganga Singha, revolted against the east india company in 1788. In an encounter with the soldiers of the Company, Ganga Singha was captured and later on committed suicide by jumping into the river. During the war of liberation, on 28 April 1971, a battle was fought between the freedom fighters and the Pak army in which 13 freedom fighters were killed and 11 were wounded. Besides, encounters were held between the freedom fighters and the Pak army at Hader Tila and Durbin Tila.

Cottage industries Weaving, cane and bamboo work, crafts made of reed and chhan (a kind of tall grass). '