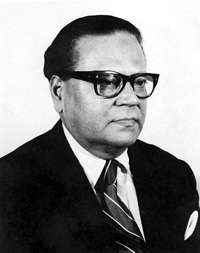 Chowdhury, Justice AFM Ahsanuddin (1915-2001) President of Bangladesh. He was born on 1 July 1915 at village Bokainagar under Gauripur upazila of Mymensingh district. Ahsanuddin Chowdhury was graduated and obtained his BL Degree from Dhaka University.

He joined the Bengal Civil Service (judicial) as a munseef in the year 1942, and subsequently served as district and session judge in Sylhet, Rangpur and Dhaka. He was appointed Additional Justice of the Dhaka High Court in 1968, and Justice of the Appellate Division of the Supreme Court in 1973. He retired from service in 1977.

Following a military coup d’etat in March 1982, the army chief of staff hussein muhammad ershad assumed power as the chief martial law administrator, and Justice Ahsanuddin Chowdhury was made President of the People’s Republic of Bangladesh on 27 March 1982, a position which he held till 10 December 1983.