Cotton (tula) fibre producing herbaceous plant of the genus Gossypium, family Malvaceae. Bengal was a cotton exporting country before the colonial rule. Bengal textiles had a worldwide name from ancient times. Cotton plants require about six months to mature. Harvesting is usually done three times at maturity. Cultivation of cotton requires water during the period of active plant growth, while dry weather conditions are necessary at maturity when the cotton boll opens. The cultivar grown in Bangladesh is known as American Cotton (Gossypium hirsutum). G. arboreum, locally called Comilla Cotton, is grown in hilly regions of Chittagong, and the chittagong hill tracts. The name Comilla Cotton is believed to have originated in the British period, when it used to be marketed through the river ports of the adjoining district of Comilla. The hilly variety is cultivated on a limited scale by tribal people in the southeastern hilly regions of Bangladesh, that is, in the districts of Rangamati, Khagrachari and Bandarban in the Chittagong Hill Tracts. 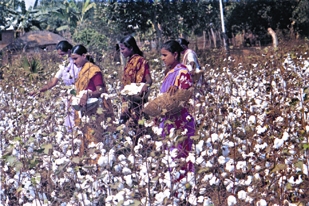 Since the variety does not produce good yarn, its use is restricted to making handicrafts, although a small quantity is also exported. The yield of this cotton is also very low and is only about 10 kg per hectare.

G. hirsutum is grown in about 35,000 ha, mostly in the northern districts of Kushtia and Chuadanga. Cotton is planted in mid-July and harvesting is completed in mid-January, after which the land can be used for growing winter vegetables, jute or Aush variety of rice. Annual yield of cotton is approximately 35,000 m tonnes. Locally produced cotton meets approximately only about 16% of the country's cotton need. The cotton development board of the Ministry of Agriculture is in charge of cotton cultivation in the country. It operates three seed multiplication centres to provide farmers with good quality seeds and technical advice, but many farmers prefer to acquire seeds from their own cotton fields. [Zia Uddin Ahmed]

Pests and diseases Over two dozens of pests are known to attack cotton in Bangladesh. Of these spotted bollworm, Earias vitella and American bollworm, Helicoverpa armigera are considered as major. Other notable pests are pink bollworm, spiny bollworm, cotton jassid and cotton aphid.

Cotton plant is affected by a number of diseases, among these fusarium wilt, bacterial blight, angular leaf spot, damping off, leaf spot, and anthracnose are notable. Compared to other cotton growing countries of the world, cotton diseases are less prevalent in Bangladesh.

The fusarium wilt is caused by the fungus Fusarium oxysporum. The pathogen enters into the plant body through the root system when the plants are 1-3 weeks old. The disease symptoms become evident when the host plant is 5-6 weeks old. The symptoms include stunting of growth and relatively small leaves and bolls. The leaves become yellowish and finally brownish in severely infested plants. Often the apical parts of the root system become blackish. Young plants may eventually die.

Anthracnose of cotton is caused by the fungus Glomerala gossipii. It affects seedling as well as the developing bolls. The disease produces characteristic stripes on the leaf, stem or bolls, and these subsequently may rotten. The disease is common in Kushtia and Chuadanga areas. Seed treatment and use of fungicides are usually suggested to protect cotton from various diseases. [Md Ibrahim Ali]