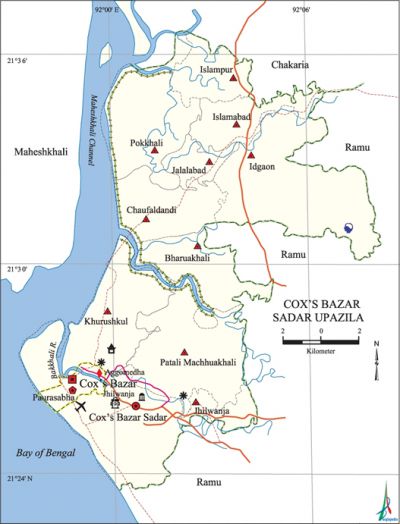 History of the War of Liberation During the war of liberation in 1971, the Pak-soldiers killed a number of people including the veteran lawyer Jnanendralal Chowdhury at a place behind the old rest house in the town. They also killed two freedom fighters by gunshot at Badar Mokam area.

Tourist spots and special attractions The longest sea beach of the world is located at Cox's Bazar. The green surroundings with the mangrove forests on the beach is also notable. Most of the areas of the upazila are covered with hills and tilas. There are different types of valuable trees including Shal, Mehogani, Garjan, Rubber and rare orchid in the hill areas. Besides, the rudder station is located on the hill top adjacent to the Circuit House. Since Cox's Bazar is a great tourist resort various establishments have developed here including six big hotels of which a three star hotel has been established on government initiatives, 30 medium size and 50 semi-medium size hotels, Jhenuk Market and the Burmese Market where luxury goods coming from China, Burma, Thailand through the border.