Crocodile (kumir) any of the 13 species of large crocodilian reptile of the family Crocodylidae, order Crocodylia. They are mainly of tropical distribution occurring in the Old and New Worlds. The name Crocodile is sometimes used in a broad sense to refer to any crocodilian, including alligators and the gavial (=Ghadial). Bangladesh has one species of gharial (Gavialis gangeticus), and two species of crocodiles: Estuarine Crocodile (Crocodylus porosus) and Marsh Crocodile (Crocodylus palustris). 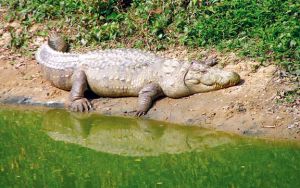 Estuarine Crocodile (mohonar kumir) In Bangladesh Estuarine Crocodile is a critically endangered species. Its underparts in young and semi-adults are remarkably light-yellowish olive with numerous dark spots all over the upper surface of the body. Adults become somewhat darker as they grow up with underparts uniformly light.

A bumpy bony ridge can be seen in front of each eye, and extend forward nearly to the nasal swelling. Its post-occipital humps are absent or feebly developed; while its nuchal humps are arranged in a cluster. Dorsal scutes are arranged regularly in 16-17 transverse rows and 6-7 longitudinal rows. Body length may reach up to 10 m, but is usually about 5.5 m. It is more aquatic than Marsh Crocodile (C. palustris); and is seen even in the sea.

Crocodiles roost during the day on well-marked trails led from water into mangrove forests and feed mainly on fish but may even hunt large animals. Mating of crocodiles start in winter and they lay eggs in May. During breeding season females make nests, usually 75 cm high and 2 m in diameter, with mounds of vegetation and mud. Number of eggs may be 20-72 (average 50); and the incubation period lasts for 80-90 days. Crocodiles live in the estuaries and coasts of the sundarbans. Habitat loss and hunting are the major threats to their survival. They are found also in S and SE Asia, Papua New Guinea and Australia (northern part).

Marsh Crocodile In Bangladesh it is almost extinct in the wild and only a few individuals survive in a pond at the shrine of Hazrat Khan Jahan Ali at Bagerhat in the southern part of the country. Both the Marsh Crocodile and Estuarine Crocodile look similar, and it is difficult to distinguish them in the wild. [Md Anwarul Islam]