Administration Debidwar Thana was formed in 1915 and it was turned into an upazila in 1983. 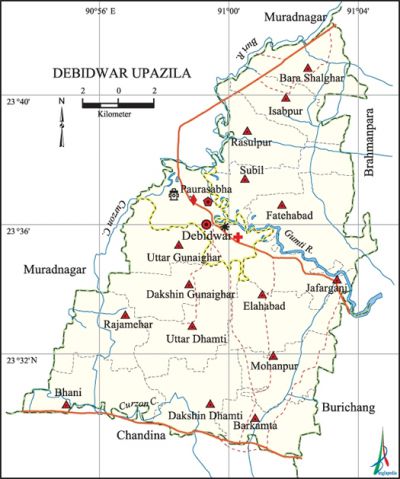 History of the War of Liberation On 31 March 1971, an encounter was held between the Pak army and the Bangalis on the Comilla-Sylhet highways in which 33 Bangalis were killed. Besides, the Pak army conducted genocides and set many houses on fire on 7 August at Charkamta, 29 September at Jakerganj and on 14 November at Thana Sadar.

Marks of the War of Liberation Mass grave 1 (Muktijoddha Chattar).

Hats, bazars and fairs Hats and bazars are 15, most noted of which are Dighirpar and Rasulpur Hat, Ponrar Poush Sankranti Mela and Baishakhi Mela.

Natural Disasters The cyclone of 1991 caused death of more than one hundred persons and damages to a number of settlements of the upazila. Besides, huge damages to crops were done in 1988, 1998 and 2004 due to floods caused by damage of the flood protection dam on the river Gumti.