Dharmapala the second and considered to be the greatest ruler of the Pala dynasty of Bengal. Son and successor of Gopala, the founder of the dynasty, Dharmapala inaugurated the period of ascendancy of the Palas. The most important event of his long reign (c 781-821 AD) was the tripartite struggle for the supremacy over madhyadesha of northern India that involved the Palas in a long drawn struggle with the Rastrakutas of Deccan and the Gurjara-Pratiharas of Malava and Rajsthana. Northern India with its traditional central seat at Kanauj felt a rush on the part of these three powers to fill up the vacuum that was created after it was swept over by Yashovarman and Lalitaditya. Dharmapala felt powerful enough to venture out in north Indian politics and did have some success, which found expression in the Pala copperplates in an eulogistic tone. It is difficult to follow the exact course of this struggle in strict chronological order.

The first phase of the tripartite struggle, which took place round about 790 AD, opened with a clash between Dharmapala and Vatsaraja, the Pratihara king, resulting in the defeat of the former, and later on a common enemy from the Deccan, the Rastrakuta king Dhruva Dharavarsa, defeated both of them. Dhruva, however, could not consolidate his victory, as he had to return to the south to save his own kingdom. Thus Dharmapala's bid for the empire in northern India did not meet with success and the Pala records are understandably silent about this phase of struggle. 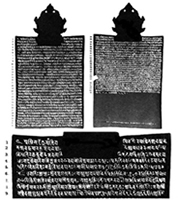 The Pratiharas took some time to recoup their power and the Rastrakutas could not hold out owing to various reasons that caused their retreat. Dharmapala was left alone to spread his influence over madhyadesha. He succeeded in placing his protege, Chakrayudha, on the throne of Kanauj, though possibly for a short time. This success of the Pala king found mention in the Pala records in an ornate form through the pen of the court poets. To crown all these eulogistic verses is the 12th verse of Dharmapala's own Khalimpur copperplate, which runs as follows: 'With a sign of his gracefully moved eyebrows he installed the illustrious king of Kanykubja, who readily was accepted by the Bhoja, Matsya, Madra, Kuru, Yadu, Yavana, Avanti, Gandhara and Kira kings bowing down respectfully with their diadems trembling, and for whom his own golden coronation jar was lifted up by the delighted elders of Panchala'. Scholars taking this verse too literally have followed suit with the court poet in ascribing credit to Dharmapala for conquering all those places and becoming the uttarapathasvami.

However, Dharmapala's supremacy over all these powers is not confirmed by other sources. It is likely that Dharmapala had some success and may have pushed his sphere of influence as far as Kanauj, where he successfully placed his own protege on the throne. In describing this success of their royal patron the court poets let loose their imagination and put in all the names of western kingdoms they could think of, in conformity to the metre of the verses. The vision of a vast north Indian empire, right up to the northwestern corner of the subcontinent, seems more reasonable as a poetic dream than as a fact. It can hardly be accepted that Dharmapala became the sole undisputed monarch of northern India.

All his offensive campaigns and success must have taken place approximately between 790 and 800 AD, ie between the retreat of Dhruva and the reappearance of Govinda III. With the rise of Nagabhatta II, son and successor of Pratihara Vatsaraja, started the second phase of the tripartite struggle. Nagabhatta defeated Chakrayudha, who took shelter with Dharmapala. Subsequently Nagabhatta also defeated Dharmapala in a battle near Munger. The Rastrakuta king Govinda III appeared in the north and inflicted a severe defeat on Nagabhatta, and Dharmapala and Chakrayudha surrendered to him of their own. But Govinda III, like his father, had to return to the Deccan (801 AD), and from then onwards Dharmapala may have passed his time in peace. It is not unlikely that he succeeded in re-establishing his supremacy over parts of northern India, though it is not known definitely.

Thus it can be said that Dharmapala launched Bengal on a career of aggrandisement. He succeeded for a time in pushing forward his influence as far as Kanauj. Though he faced reverses at the hands of the Pratiharas and the Rastrakutas, he managed to survive. Bengal saw under his leadership prosperity and success, which must have elated the court scribes to exaggerate these deeds.

Dharmapala was a Buddhist. He is credited with the foundation of the vikramashila monastery, which was one of the most important Buddhist seats of learning in India from the 9th to the 12th centuries AD. somapura mahavihara at paharpur was also a creation of Dharmapala. He was equally enthusiastic in his patronage of the Brahmanical shrines. He is said to have been 'conversant with the precepts of the shastras and he made the castes conform to their proper tenets'. He may be regarded to have initiated a policy of religious toleration and mutual co-existence of different religions, which was one of the glorious legacies of Pala rule in Bengal.

A glimpse of Bengal under Dharmapala is reflected in the accounts of the Arab geographers and merchants like Sulaiman (d 851 AD), Ibn Khurdadhbeh (d 912 AD), Idrisi (b end of 11th century AD) and Masudi (d 956 AD) who mention that the king of Bengal was engaged in a struggle with the Rastrakutas (Balhara) and the Gurjaras (Jurz). All of them mention about Bengal's flourishing sea-trade in the 9th and 10th centuries in which the Arabs had a fairly dominant role. Hudud-ul-Alam, a Persian work (982-83 AD), records that Dharamapala (Dahum), did not regard anybody as greater than himself and had an army of 300,000. [AM Chowdhury]