Dohar Upazila (dhaka district) area 161.49 sq km, located in between 23°31' and 23°41' north latitudes and in between 90°01' and 90°13' east longitudes. It is bounded by nawabganj (dhaka) upazila on the north, the padma river and sadarpur upazila on the south, sreenagar and Nawabganj (Dhaka) upazilas on the east, harirampur and char bhadrasan upazilas and the Padma river on the west.

Administration Dohar Thana was formed in 1926 and it was turned into an upazila in 1983.' 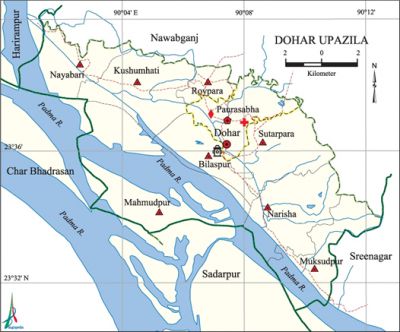 Historical events Extensive indigo plantation was at Joypara of the upazila in early British period. During the Non Cooperation Movement led by Mahatma Gandhi (1920-1922) 'Abhai Ashram' was established in this upazila. The All India Convention of Gandhi Seba Sangha was held at village Malikanda in 1940. On this occasion Mahatma Gandhi came to the upazila and stayed for two days.

Sources of drinking water Tube-well 93.62%, pond 0.64%, tap 0.53% and others 5.22%. The presence of intolerable level of arsenic has been detected in the shallow tube-well water of the upazila.