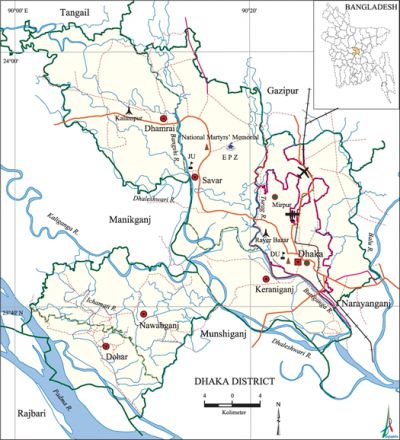 History of the War of Liberation The flag of Bangladesh was hoisted for the first time at the Dhaka University Battala on 2 March 1971. Bangabandhu sheikh mujibur rahman was arrested by the Pak army from his Dhanmondi residence on 25 March. In the midnight of 25 March the Pak army launched attacks on the Bangalis at the Cantonment, headquarters of the East Pakistan Rifle (EPR) at Pilkhana, Rajarbagh Police Barrack, headquarters of Ansar at Khilgaon, residences of Dhaka University teachers and student halls in which thousands of people including members of armed forces, EPR, police, teachers, students and staff were killed. The Pak army set many houses on fire in Dhaka City including densely Hindu populated Sankhari Patti and Tanti Bazar. On 27 March the Pak army brutally killed 13 persons at Malakartola. In the month of July 1971 the freedom fighters destroyed the power station of the AGB Colony near the Kamlapur Railway Station and thereby put the Pak army in a difficult position. An encounter between the freedom fighters and the Pak army was held at Joar Shahara on 9 December in which a number of freedom fighters were killed. On 14 November, an encounter between the freedom fighters under Nasiruddin Yusuf and the Pak army was held at Savar in which Muktijoddha Shahid Golam Dastagir Titu was killed. On 14 December, the Pak army in collaboration with the Rajakars and Al-Badrs brutally killed many people including the intellectuals of the country. In another encounter between the freedom fighters and the Pak army at the Mother Tek area 11 Pak soldiers were killed. During the war of liberation the Pak army conducted torture and plundering at different places of Badda and Batara areas and killed two persons at village Salameid. The Pak army set most of the houses of the villages Konakhola, Bashta, Brahman Kirtheha, Goalkhali, Owalitia, Khagail Golamora of Keraniganj upazila on fire. However, Pak army were forced to retreat in the face of attack by the freedom fighters. The Pak army brutally killed 14 freedom fighters at a place near Kamalapur Bazar who were captured from Dhamrai Bazar of Dhamrai upazila. The complete victory was achieved on 16 December when the Pak army surrendered at the Ramna Race Course.

See also Upazilas under this district.