Domar Upazila (nilphamari district) area 250.84 sq km, located in between 26°02' and 26°19' north latitudes and in between 88°46' and 88°54' east longitudes. It is bounded by west bengal of India on the north, nilphamari sadar upazila on the south, dimla and jaldhaka upazilas on the east, debiganj upazila on the west.

Administration Domar thana was formed in 1875 and it was turned into an' upazila in 1984. 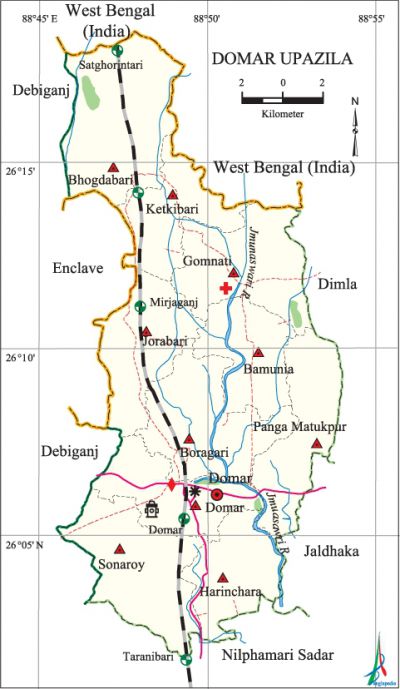 Historical events The peasants of this upazila revolting against the British government and the local zamindars, declared Domar as an independent state in 1921. The Provincial Conference of the Krishak Sabha was held on 18 and 19 July 1942 in this upazila. The most noted participants of the conference were Communist leader Jyoti Basu, peasant leaders Mansur Habibullah and Nripen Chakraborti. tebhaga movement, in an extensive form, spread over the area in 1946-1947. At the end of April 1971 the people of the upazila marched towards Syedpur to attack the Pak army camp with 63 rifles and other indigenous weapons; however, they were forced to retreat.

Hats, bazars and fairs Hats and bazars are 25, fairs 1, most noted of which are Basunia, Ambari and Boragari Hat.

Natural resources' There is coarse sand (Domar Sand) in this upazila.

Natural disasters The famine of 1943 caused huge loss of life in this upazila.