Administration Jaldhaka Thana was formed in 1911 and it was turned into an upazila in 1983. 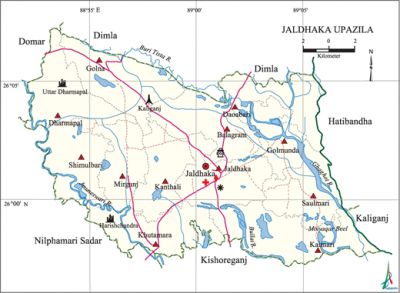 History of the War of Liberation The Pak army established a camp at the Jaldhaka High School in 1971; they used to capture innocent persons from the nearby locality with the help of the local razakars and brutally killed them.

Marks of the War of Liberation Mass grave 2 (Kaliganj, and at the backyard of Jaldhaka High School).

Hats, bazars and fairs Hats and bazars are 85, fairs 3, most noted of which are Jaldhaka, Mirganj and Kaimari Hats; Tatua Mela and Balagram Chandihati Mela.

Natural disasters Many people of the upazila were victims of the great famine of 1943. Besides, the flood of 1998 caused heavy damages to settlements, lovestock, crops and other properties of the upazila.