Dowarabazar Upazila (sunamganj district) area 324.19 sq km, located in between 24°58' and 25°11' north latitudes and in between 91°24' and 91°43' east longitudes. It is bounded by Meghalaya state of India on the north, chhatak upazila on the south and east, sunamganj sadar upazila on the west.

Administration Dowarabazar Thana was formed in 1976 and it was turned into an upazila in 1985. 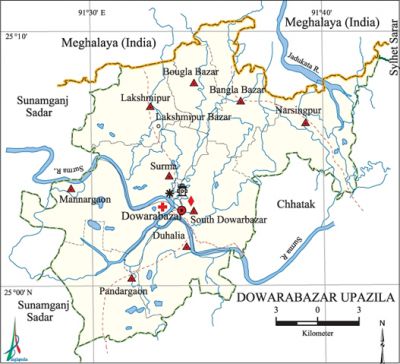 Natural disasters The hailstorm of 1991 caused huge damages to crops and plantation of the upazila. In 2005 a serious explosion occurred in the Tengratila Gas field resulting burning of gas for about a month. In this incident total damage to properties including loss of natural gas was worth Tk. 15 thousand crore.