Gambhira Gan a type of folk song popular in the northwestern region of Bangladesh. Gambhira songs are assumed to have originated from the worship of the god shiva, who is also known as 'Gambhir'. In ancient times, gambhira used to be celebrated as puja (worship) only. In the medieval period, most Hindu communities celebrated the puja of dharma thakur (a popular god of the Hindus) on the last three days of the Bengali year; this came to be known as the gajan of Shiva later on. In the past Shiva was imagined to be present at the performance. 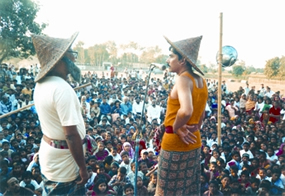 Gambhira songs originated among the Hindu community of Maldah in west bengal. After the creation of Pakistan, Chapai Nawabganj in rajshahi became the main centre of gambhira songs, which underwent major changes in theme and mode of presentation. Muslims became the custodians of this song and made it an integral part of their social life and their culture. Apart from Rajshahi, gambhira songs are also popular inNawabganj and Naogaon.

At present the main characters of a gambhira are a maternal grandfather and his grandson. The performance is structured as a dialogue, interspersed with songs. Both prose and verse are used for the dialogue. The gambhira reflects contemporary social problems through witty dialogue, songs, dances and jokes. Both the actors wear lubgi. The grey-bearded grandfather wears a mathal (straw hat) on his head and holds a stick in his hand. The grandson wears a torn jersey and has a gamchha (local checked towel) tied round his waist.

In the past gambhira songs were sung in the measures of ektal, trital, dadra, khemta, kaharba etc. Today the tunes are influenced by songs from popular Bangla and Hindi movies. Kutubul Alam, Rakibuddin, Biren Ghosh and Mahbubul Alam of Nawabganj have made the gambhira song popular in Bangladesh by introducing new subjects and characters and interesting and' witty dialogue. [Shahida Khatun]