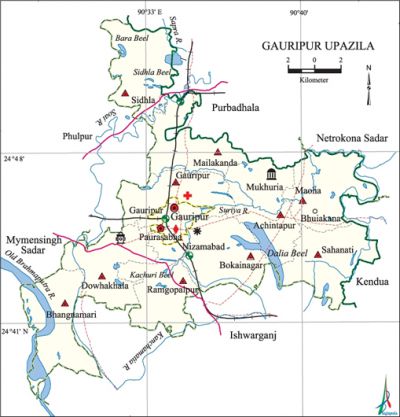 Historical events The capital of the Afghan hero Khwaja Usman 'was at Bokainagar (Qellah Bokainagar). In 1601/1602 Mughal commander Mansingh attacked Bokainagar. Usman Khan was defeated and fled to Sylhet. Qellah Tajpur of Maoha was the capital of Umar Khan during the reign of the Mughal Emperor Jahangir. The love story of Sakhina, the daughter of Umar Khan, with Feroj Khan, the grandson of Isa Khan and its satiric end in armed war is still a legend. During the mass upsurge in 1969 police opened fire on the agitated civilian who took part in violating the Section 144; in this incident Harun of Gauripur Government College was killed. 'Martyr Harun Park' was later established in his memory. On 20 August 1971 the Pak army brutally killed 14 persons at village Shalihar. On 30 November, the Pakistan army killed Mati, Monju, Siraj and Jasim of Mujib Bahini at Palashkanda of the Gauripur-Ishwarganj border.