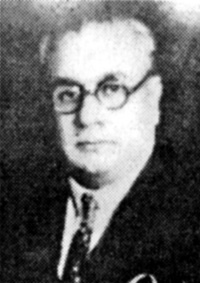 Ghaznavi, Abdul Halim (1876-1953) was a politician, patron of education and culture, zamindar and industrialist. He was born on 11 November 1876 in a zamindar family in the village of Delduar of Tangail district. He was the second son of Abdul Hakim Khan Ghaznavi and younger brother of Nawab Bahadur abdul karim ghaznavi. He had received education from the City School and St. Xavier's College of Kolkata.

Abdul Halim started his public career in 1900, when he became the chairman of the Mymensingh Municipality. He was also an Honorary Magistrate of Mymensingh.

He began his political career from the stormy days of the partition of bengal (1905). While most Muslim leaders supported the partition measure, Ghazanavi joined the Congress line and opposed the partition. Thus he came in very close contact with the leaders like, Aswini Kumar datta (1856-1923), surendranath banerjea (1848-1925), chitta ranjan das (1870-1925), and aurobindo ghosh (1872-1950). He joined a public meeting held on 27 August 1905 in the premises of the Jagannath College (now Jagannath University) presided over by Ananda Chandra Roy (1844-1975) in order to protest the partition. He expressed the importance of the Hindu-Muslim unity in Bengal and also called upon the Muslims to join the non-cooperation movement of the Congress. He participated in the conference of the Bengal Provincial Congress held on 14 and 15 April 1906 at Barisal. Abdul Halim Ghazanavi participated in the 23rd session of the All-India National Congress held on 26-27 December 1907 at Surat. But later he became disillusioned of Congress politics and joined the Muslim League.

Abdul Halim was one of the Members of the All Indian Muslim League Council as well as a Member of the Muslim League Parliamentary Party in the Central Legislalive Assembly. He was elected a member of the Legislative Assembly from the Rural Muslim Constituency of the Dhaka division in 1927 and Dhaka-Mymensingh (Muslim) Constituency in 1931 and 1935. He maintained the position from 1927 to 1945. He presided over the All-India Muslim Conference held in Kanpur in 1929. He attended all the three Round Table Conferences held in London in 1930, 1931 and 1932 as a delegate of the Muslim League. He held the posts of Sheriff of the calcutta corporation, the President of the Central National Mahammadan Association and the Vice-President of the British-Indian Association. Abdul Halim was knighted in 1935.

Halim Ghaznavi was involved in the publication of two Muslim League newspapers namely; 'The Mussalman' (est.1885) and 'The Star of India'. He came back to live in his own village after 1947. Abdul Halim Ghazanavi died on 18 June 1953 at Delduar. [Muhammad Abdus Salam]