Administration Hakimpur Thana was formed in 1950 and it was turned into an upazila in 1984. 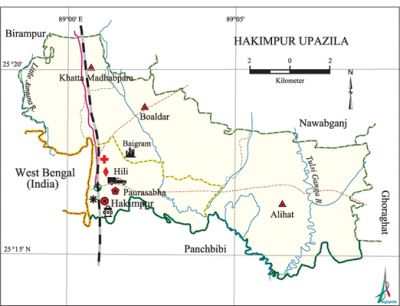 Archaeological heritage and relics Copperplate of the Gupta period (Baigram).

Historical events During the anti British armed movement in 1933 the anushilan samiti and the jugantar party (two secret revolutionary organisations) raided the Darjeeling Mail at Hili station and captured the arms and ammunitions' from the boggirs; they also set the railway station on fire. The Pak army raided Hilli on 19 April 1971. Two freedom fighters were killed in an encounter with the Pak army at Hakimpur Chhatni. The Pak army brutally tortured to death many male family members and took the young women to the military camps at villages Banial, Chhatni, Jagrai and Saduria. During the' war of liberation, the freedom fighters used Hili as a safe passage to communicate with the Indian army. During the period between 21 November and 11 December about 345 freedom fighters were killed in encounters with the Pak army at different' places of the upazila. Hakimpur was liberated on 11 December.

Hats, bazars and fairs Hats and bazars are 32, fairs 3, most noted of which are Hili and Dangapara hats, Manglar Par Mela, Jalalpur Mela and Dangapara Mela.