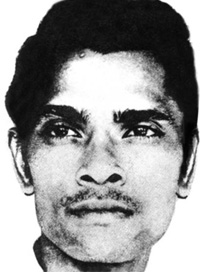 Hasan, Abul (1947-1975) poet and journalist, born at Barnigram in tungipara, gopalganj at his maternal uncle's residence on 4 August 1947. His paternal residence was at Jhanjhania Gram in nazirpur, pirojpur. His real name was Abul Hossain Miah; Abul Hasan was his pen name.

Abul Hasan passed the SSC examination in 1963 from Armanitola Government School in Dhaka, and the HSC from BM College, Barisal.He got admission at the University of Dhaka to study English with honours, but could not complete his studies. Instead, he joined the news section of the Ittefaq in 1969. Subsequently, he became assistant editor of the Ganabangla (1972-73) and Dainik Janapad (1973-74). Abul Hasan, who came first in the Asian Poetry Competition held in 1970, occupies an important place in modern Bangla Poetry though he wrote for only a decade. His poems reflect the feelings of grief, self-abnegation, and loneliness. They are preoccupied with imaginings of death and ideas of separation. Among his volumes of poems are Raja Yay Raja Ase (1972), Ye Tumi Haran Karo (1974) and Prithak Palabka (1975).

The poetic play Ora Kayekjan (1988) and Abul Hasaner Galpa Sanggraha (1990) were published after his death.