Hatiya Upazila (noakhali district) area 1508.23 sq km, located in between 22°07' and 22°35' north latitudes and in between 90°56' and 91°11' east longitudes. It is bounded by noakhali sadar and ramgati upazilas on the north, bay of bengal on the south and the east, manpura upazila on the west.

Administration Hatiya Thana was turned into an upazila in 1983. 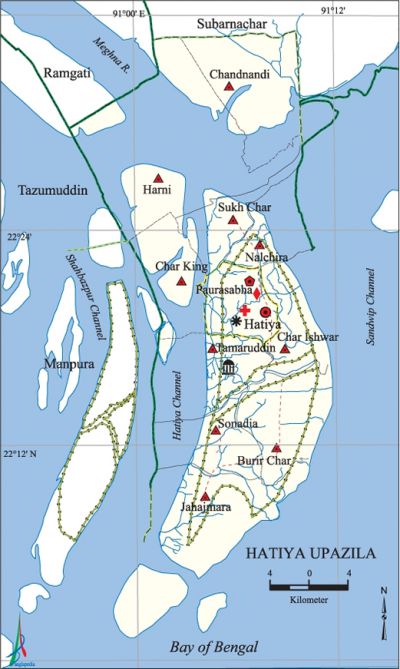 History of the War of Liberation On 11 May 1971, the Pak army raided the Hatiya town and conducted heavy tortures and plundering; they also set many houses on fire. The Pak army shot six persons dead at Afazia Bazar and two persons at Uchhkhali Bazar.

Amusement centers Nijhum Dwip (island) is one of the most important tourist spots of the country. Sun rise and sun set can be viewed from the vast extended sea beaches located on the southern and western extremities of the island. Considering the natural beauty and to preserve the bio-diversity of the island the government of Bangladesh declared 40 thousand acres of land of the upazila as national park in 2001. Besides, the island renders considerable contributions to Bangladesh economy, especially in the sectors of fishery, and of collecting honey.

Natural resources Natural gas has been discovered in Char King union of the upazila.

Natural disasters The devastating cyclone and tidal bore on 12 November 1970 caused death of more than one lakh people of the coastal area. It also caused heavy damages to settlements, livestock and crops of the region.