Administration Homna Thana, now an upazila, was formed in 1918. 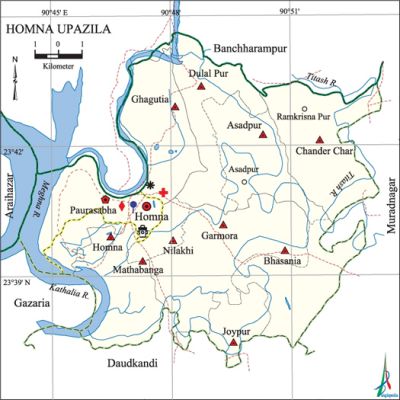 History of the War of Liberation At the end of July 1971 the Pak army attempted an entry into the Joypur village through the Titas. The freedom fighters attacked them from both sides of the river causing serious damage to enemy motor launch. The Pak army retreated towards Machhimpur. A number of Pak soldiers were killed or wounded in this encounter. Besides, encounters were held between the freedom fighters and the Pak army at different places of the upazila including Champak Nagar, Ghagutia, Nilokhi Bazar, Dulal Bazar, Homna Sadar and Panchabati in whcih 23 freedom fighters were killed and 24 were wounded. The Pak army also buried alive a number of men, women and children at a place adjacent to the' Homna Degree College.

Natural disasters The tornado of 1969 and the flood of 1998 caused heavy damages to settlements and crops of the upazila.