Administration Jagannathpur Thana was formed in 1922 and it was turned into an upazila in 1983. Municipality was established in 1999. 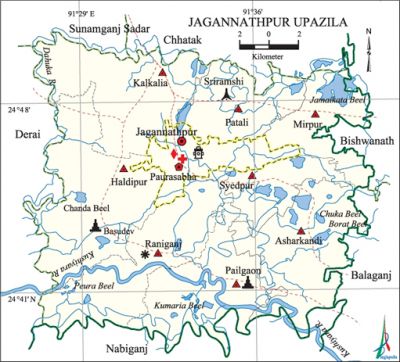 History of the War of Liberation During the war of liberation, on the 31 August 1971, the local razakars arranged a so-called peace meeting at Sriramshi High School compound and arranged a gathering of teachers, officials, union parishad members, local elite and a cross section of the people. With the help of the Razakars the Pakistani army brutally killed 126 persons by firing on the meeting, and the entire village was set on fire. Again on 8 September the Pak Army killed 30 innocent civilians and sacked about 150 shops at Raniganj Bazar.

Hats, bazars and fairs Hats and bazars are 31, fairs 3, most noted of which are Jagannathpur, Raniganj, Nayabandar, Syedpur and Kasabpur bazars and Basudev Bari Mela.