Jaintiapur Upazila (sylhet district) area 280.27 sq km, located in between 24'59' and 25'11' north latitudes and in between 92'03' and 92'14' east longitudes. It is bounded by Meghalaya State of India on the north, kanaighat and golapganj upazilas on the south, Kanaighat upazila on the east, gowainghat and sylhet sadar upazilas on the west. The Jaflong Hills Range is located on the northeast of the upazila.

Administration Jaintiapur Thana was formed in 1903 and it was turned into an upazila in 1983. 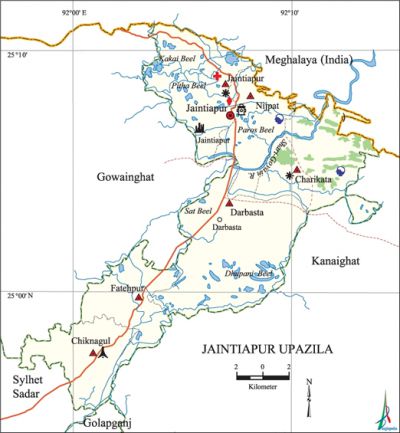 History of the War of Liberation In 1971 the Pak army conducted heavy torture, genocide and plundering; they also set many houses of the upazila on fire. The Pak army killed a number of innocent persons at village Hemo by gun shot from the fighter plane. Besides, the Pak army brutally killed 30 persons including the Khan Tea Garden workers.

Hats, bazars and fairs Hats and bazars are 7, fairs 3, most noted of which are Jaintiapur, Darbasta, Haripur, Chiknagul and Shukrabari bazars.