Joypurhat District (rajshahi division) area 965.44 sq km, located in between 24°51' and 25°17' north latitudes and in between 88°17' and 88°55' east longitudes. It is bounded by dinajpur district on the north, naogaon and bogra districts on the south, Bogra and gaibandha districts on the east, Naogaon district and west bengal state of India on the west.

Administration During the period from 1971 to 1984 Joypurhat was a Sub-division under Bogra district; it was turned into a district in 1984. Of the five upazilas of the district panchbibi is the largest (278.53 sq km, it occupies 28.85% of the total area of the district) and akkelpur is the smallest upazila (139.47 sq km). 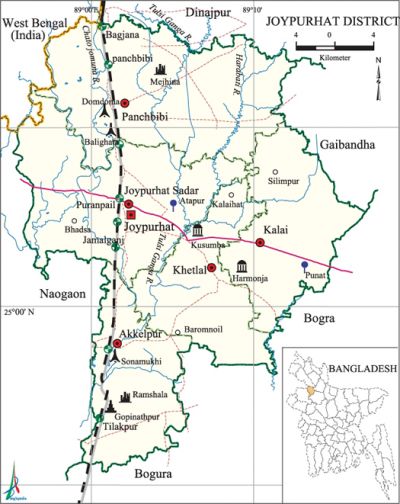 History of the War of Liberation During the war of liberation Joypurhat was under Sector 7. On 23 March the flag of the independent Bangladesh was hoisted at Joypurhat sadar. On 20 April, the Pak army raided the Panchbibi Bazar and killed many people; they also set the Bazar on fire. A battle was fought between the freedom fighters and the Pak army in Ayesa Rasulpur union of Panchbibi upazila in which 24 Pak soldiers were killed. The Pak army brutally killed about 371 people at village Barai-Kadirpur under Bambu union of Joypurhat upazila. On 5 October, the Pak army brutally killed about 300 innocent people at village Pagla Dewan of Joypurhat upazila while they were performing the Jumma prayer. Joypurhat was liberated on 14 December.