Administration Kanaighat Thana was formed in 1932 and it was turned into an upazila in 1983.

Historical events The annual Jalsha of the Kanaighat Madrasa was scheduled to be held on 23 March 1922. The British government imposed ban on the jalsha and declared 144 in and around the place. The organisers violated the Section 144 and the mob attacked the Commissioner. In this conflict six persons died and 38 injured by police firing. This is known as 'Kanaighater Larai' (fight at Kanaighat). During the war of liberation in 1971 the Pak army in collaboration with the local razakars conducted mass killing, mass torturing and plundering in diferrent places of the upazila including at Maligram and Gouripur. 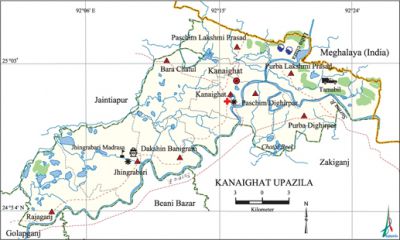 Marks of the War of Liberation Mass killing site 1 (Bishnupur), Mass grave 1 (Bishnupur, on the bank of a canal); memorial monument 1 (Momtazganj).

Hats, bazars and fairs Hats and bazars are 21, most noted of which are Kanaighat and Jhingrabari bazars.