Administration Kaunia Thana was formed in 1916 and it was turned into an upazila in 1984.

History of the War of Liberation On 1 April 1971 the freedom fighters shot the Officer in Charge of the Thana (Police Station) dead. On 2 June the villagers killed two Pak soldiers attempting violation of women in a village. In consequence the Pak army sacked the villages located on the western side of the Tista Barrage and killed nearly 200 persons on 30 June. 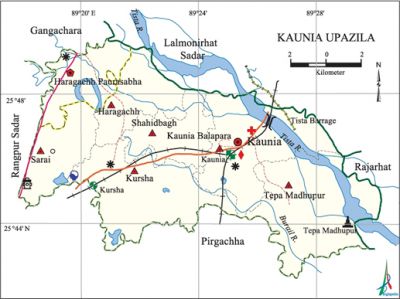 Hats, bazars and fairs Hats and bazars are 14, most noted of which are Sarai Hat, Shahidbagh Hat, Baroar Hat, Bhaiya Hat, Singar Kura Hat and Burir Hat, Kaunia Bazar, Haragachh Bazar and Mirbagh Bazar, Buri Mela of Shiva Mandir at Burirhat, Mela on the occasion of Austami Baruni Snan on the bank of Tista and fairs of Haragachh, Khansama, Kaunia and Tepa Madhupur on the occasion of Muharram.