Administration Gangachara Thana, now an upazila, was formed in 1917.' 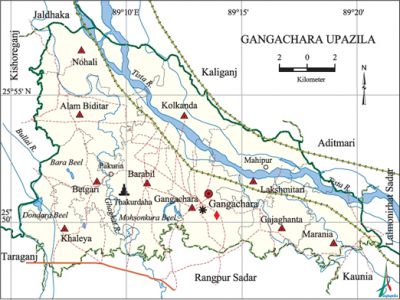 History of the War of Liberation In the middle of August 1971, a Pak soldier entered into Gangachara and chased a young girl and her father. The victims, finding no way to safety, jumped into the river and died. In the month of October, two Pak soldiers and five razakars were killed in an encounter with the guerrillas of Mujib Bahini. Later on, the Pak army launched attack on the innocent people and killed 17 pious Muslims entering into the Taltala Mosque. About 212 razakars surrendered to the Gangachara police station on 13 December.'

Marks of the War of Liberation Memorial monument 1 (Mahipur).

Natural disasters Gangachara area is highly prone to river erosions. In 1787, one fourth of the jamindari of Mahipur went under river bed due to the change of the course of the river Tista. As a result many people became landless. In 1964, the vast areas of' Marania, Gajaghanta and Mahipur unions went under river bed due to the erosion by the Tista. Besides, heavy damages to settlements and properties were caused due to the flood and river erosions of 1964, 1968, 1971 and 1974.