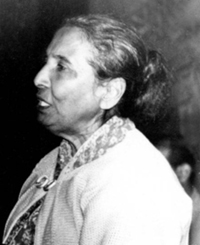 Khanum, Zobeda (1920-1989) educationist and litterateur, was born at Azharbagh in kushtia district on 5 March 1920, daughter of Khandkar Azharul Islam, a school inspector. She got her early education from a tutor at home. After marriage, she moved to Kolkata where she appeared privately in the Matriculation, IA and BT examinations.

After completing her BT in 1946, Zobeda Khanum taught for a brief period at Calcutta Corporation School. In 1947, after partition, she moved with her husband to dhaka and joined Kamrunnesa School as assistant teacher. She obtained the MA degree from Dhaka University in 1950. Subsequently, she received a Diploma in Education from London University.

Zobeda Khanum wrote in several genres: novels, short stories, plays and juvenile literature. Her novels include Abhishapta Prem (1959), Duti Ankhi Duti Tara (1963), Akasher Rang (1964), Banamarmar (1967) and Ananta Pipasa (1967). Her short stories have been compiled in Ekti Surer Mrtyu (1974) and Jiban Ekti Durghatana (1981). Her plays include Jhader Svaksar (1967) and Ore Bihabga (1968). Among her books for children are Galpa Bali Shona (1966), Mahasamudra (1977) and Sabas Sultana (1982). The urban middle class forms the focus of her short stories and novels. In recognition of her contribution to bangla literature she was honoured with the Agrani Bank Award (1983). She died in Dhaka on 26 January 1989. [Wakil Ahmed]