Khilkhet Thana (Dhaka metropolitan) area 15.88 sq km, located in between 23°49' and 23°51' north latitudes and in between 90°24' and 90°29' east longitudes. It is bounded by dakshinkhan and uttarkhan thanas on the north, badda thana on the south, rupganj and kaliganj upazilas on the east, cantonment and bimanbandar thanas on the west.

Administration Khilkhet Thana was established on 27 June in 2005 consisting of south parts of Badda thana. 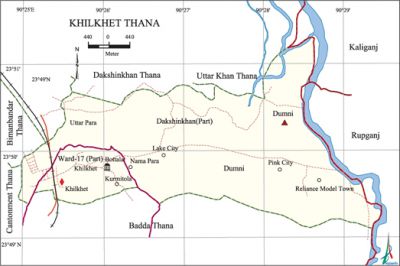