Killing of Intellectuals a planned killing of the Bangali intellectuals representing one of the most brutal and savage carnages in history. The killing of the intellectuals, educationists, journalists, litterateurs, physicians, scientists, lawyers, artists, philosophers and political thinkers was executed by a group of collaborators under the directive and guidance of the Pakistani military rulers in occupied Bangladesh during the war of liberation in 1971. 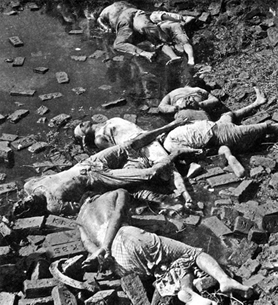 A site of mass massacre of Intellectuals, Mirpur

The blue print of crippling the intelligentsia is known to have been chalked out by a body of at least ten persons headed by Major General Rao Farman Ali, the military adviser to the Governor of East Pakistan. It is widely believed that the killings of 14 December was orchestrated by Rao Farman Ali. After the liberation of Bangladesh, a list of Bangali intellectuals (most of whom were executed on 14 December) was discovered in a page of his diary left behind at the Governor House.

The existence of such a list was confirmed by Farman Ali himself, although he denied the intention of genocide. The execution of the blue print was led by Brigadiar Bashir, Lt Colonel Hejazi, Major Zahur, Major Aslam, Captain Nasir and Captain Qayyum under the overall guidance of Lt. General Ameer Abdullah Khan Niazi, commander of the Eastern Command of Pakistan army. The extreme right wing Islamist militia groups al-badr and al-shams executed the brutal killings, having been provided with arms and support by the Pakistan army.

The killing of the intellectuals virtually began following the army crackdown in Dhaka on the night of 25 March. The Pakistan army during their operation searchlight chalked out the targeted victims and killed them. Some of the teachers of Dhaka University were killed on the night of 25 March. But the planned killing of the intellectuals took a serious turn especially in Dhaka during three or four days preceding the surrender of the Pakistan army on 16 December. On the night of 14 December, over 200 of intellectuals were abducted from their homes in Dhaka. The act of killing was initiated in Dhaka and gradually spread over the whole of East Pakistan especially in the district and subdivisional towns.

The killers used to abduct the targeted victims from their respective houses in gestapo style, and carry them blind folded to particular torture cells at Mirpur, Mohammadpur, Nakhalpara, Rajarbagh, Physical Training Centre (Mohammadpur) and other locations in different sections of the city. They mostly took advantage of curfew in the city and kidnapped the victims. The victims were physically tortured, brutally killed mostly by indiscriminate bayonet charges. The main spots of execution in Dhaka city were Alokdi, Kalapani, Rainkhola, back yard of Bangla College, Harirampur graveyard, Shialbari in Mirpur, eastern end of Mohammadpur thana, and Rayerbazar. In the marshy land at Rayerbazar and at Mirpur, a huge number of dead bodies were found scattered in the ditches, plains and inside the heaps of bricks. The dead bodies, eyes covered and hands tied on the back, were found bruised all over, bullet shots on the chest, head or back and bayonet injury all over the body.

In memory of the martyred intellectuals, 14 December is mourned in Bangladesh as Shaheed Buddhijibi Dibash (Martyred Intellectual Day).

The number of intellectuals killed in the country could not be estimated exactly, not to speak of the identity of the persons killed. From the available sources the number hitherto traced may roughly run as follows: educationist 991, journalist 13, physician 49, lawyer 42, litterateur and artist 9, engineer 5, others 2. [Muazzam Hussain Khan]