Kushtia Sadar Upazila (kushtia district) area 316.27 sq km, located in between 23°42' and 23°59' north latitudes and in between 88°55' and 89°04' east longitudes. It is bounded by pabna sadar and ishwardi upazilas on the north, harinakunda and shailkupa upazilas on the south, kumarkhali upazila on the east, mirpur (Kushtia) and alamdanga upazilas on the west.

Historical events Like other parts of Bengal indigo resistance movement spread over Kushtia. A group of 147 Pak soldiers faced heavy resistance from the local EPR, Police, Ansar, students and general public on their entry to Kushtia on 25 March 1971. On 30 March 1971, the flag of the independent Bangladesh was hoisted in Kushtia. An encounter was held between the freedom fighters and the Pak army at Bangshitala of the Kushtia sadar on 5 September in which a number of freedom fighters were killed. The Pak army killed about 12 persons of a single family at 'Kohinoor Lodge' in Mill Para.' 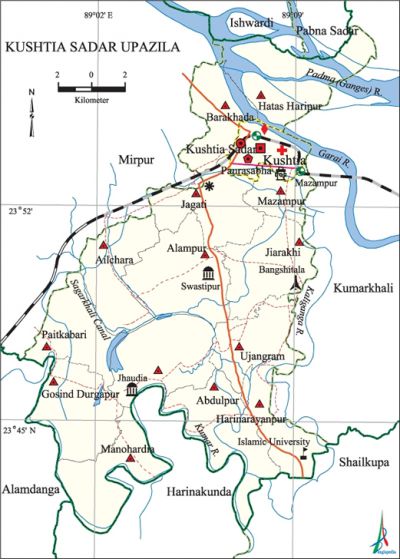 Natural disasters A few thousands of people were victims of the famines of 1876 and 1897.'