Administration Lohagara Thana was formed in 1861 and it was turned into an upazila in 1984. 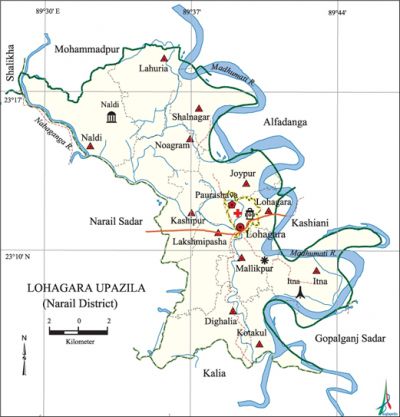 History of the War of Liberation In 1971 a battle was fought between the freedom fighters and the Pak army and local razakars in which 8 Pak soldiers were killed and so were 2 freedom fighters. On 23 May the Pak army conducted mass killing and plundering at village Itna; they also set many houses of the village on fire. Lohagara upazila was liberated on 8 December.

Marks of the War of Liberation Mass grave 1 (Itna).

Natural disasters Many people were victims of the flood of 1954, draught of 1957 and devastating cyclones of 1961 and 1988; they also caused heavy damages to settlements, livestock, crops and other properties of the upazila.